2 different modification dates! How is this possible?

See the image and the database xxxDT doesn’t seem to get synced to DT correctly:

Then I did Rebuild database and it looked like it uploaded the files.

When opening the XXXDT database from Dropbox (by double-clicking) I get the latest, up-to-date version - so it seems - but is this really from Dropbox? 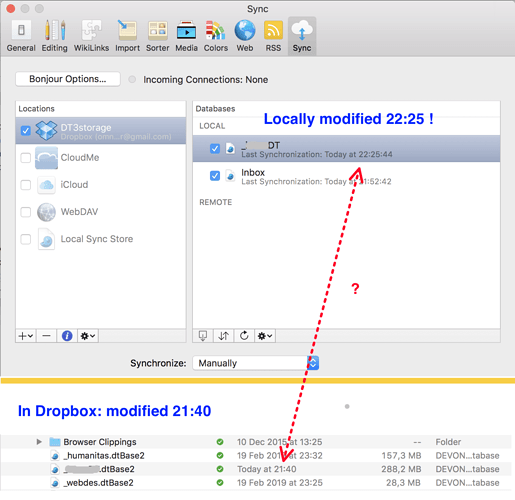 One date is when your local database was last modified.

The other is when the sync store was last modified.

Those are similar but not the same.

When opening the XXXDT database from Dropbox (by double-clicking) I get the latest, up-to-date version - so it seems - but is this really from Dropbox?

You should not be able to open a DEVONthink database in a cloud-synced location like Dropbox, not should you be putting your databases there. You should close them and move them to the Databases folder in your Home directory.

My ‘original’ DEVONthink databases are in the Home directory, and I think they got unto Dropbox with an automatic 3rd party back-up. (This can be reversed of course, if necessary.)

However, I still can neither find the DTstorage (which maybe is just a name inside DT3), nor anything synched, which is supposed to be on Dropbox (see image above), and for which a successful synchronization is being applied.

When properly set up, you will not see any local sync data for a Dropbox sync. Our sync engine syncs directly to Dropbox’s servers. In fact, there is no need to even have the Dropbox application installed on the machine for syncing as our sync engine doesn’t even use it.

So I’m trying to understand this, please bear with me:
The user’s DT database(s) are synched to Dropboxs servers - I suppose to the user’s account, right?

Then something should be ‘seen’ on the user’s Dropbox account, wouldn’t it.

Especially when the user wants to connect the sync from another device (iPadOS).

/
Any assistance would be greatly appreciated!

Then something should be ‘seen’ on the user’s Dropbox account, wouldn’t it.

Yes you can see it in your Dropbox account.

But your screenshot is of a copy of your database in Dropbox - that is not affected by the sync process and not a recommended location to store your Devonthink database.

@rkaplan is correct on these details, including the big distinction between the database and a sync location. 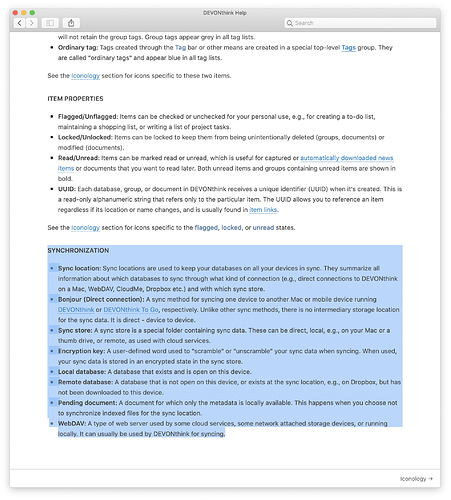 A sync store is the .dtCloud folder used in non-Bonjour syncing.

Also discussed in In & Out > Sync and Preferences > Sync.

Alright, got it. Thank you!

Now managed to sync from iPad (iPadOS13.x) with my sync storage and the database .