Synopsis: Below I report the implementation of a spaced repetition system entirely in DT/DTTG. At first, the description of the setup might look complicated, but once the initial steps are done, this works without further ado:

Spaced repetition practice can be very helpful to learn and maintain knowledge. There are well-known standalone programs for computers and handheld devices, for example Anki and SuperMemo. However, the bulk of my information is inside Devonthink databases, and I did not want to create yet another, unrelated system. In addition, I am not interested in zipping through vocabulary flashcards. As a physicist about a decade from retirement, I want to review a mix of self-created cards with facts that I try to remember as well as documents such as scientific literature that I periodically want to remind myself of. In other words, any document could be a “card”. I also want to study and review mostly on my iPad and iPhone, while maintaining the system on the Mac.

I’ve now implemented such a system in DT/DTTG: 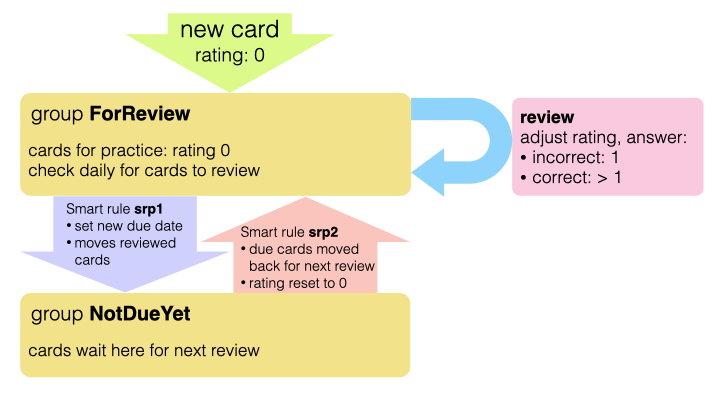 Here is what’s needed to get this rolling:

“Cards” (really any documents to review) are then loaded by replicating them from anywhere in the same DB into ForPractice, making sure that the item’s rating is set to zero. From then on, this card will remain in the review loop.

Within the hour, the smartrule srp1 will reschedule the cards using the DT reminder due date. Cards that were reviewed today are parked in NotDueYet, and smart rule srp2 will bring due cards back into ForReview according to the spaced repetition algorithm (inside the srp1 AppleScript).

Reviewing on iOS is facilitated by setting the view options for the ForReview group to “sort by rating (ascending)” and for “Summary” choose to show Property Icons so that you can see the rating. Then, during your review, the unrated (hence unreviewed) cards will stay at the top. Keep reviewing the top-most card, unless there is no unrated one left.

When reviewing on iOS, of course, sync has to be on and DT on the Mac running, executing the smart rules prior to the next morning, when the next round of reviews becomes available.

Here are the smart rules and the AppleScripts contained in them:

Some tips for creating cards

Create a Keynote document with two pages, first one for question, second for answer. Choose a portrait format for the slides so that the first slide is filling the screen on the iPad, not to reveal the answer on the second page. Keep such a blank file in the SRP group, duplicate it, edit it, and move it into ForReview to create a card. Using Keynote for this, the Apple Pencil can be easily used to create content or annotate right on the iPad. Furthermore, it is trivial to add rich components such as images and LaTex-based formulae (caveat: hyperlinks will not function in the DTTG-internal view of the Keynote file).

This method can be arbitrarily modified by editing the srp1 AppleScript. Since we use the ratings to provide feedback, a more differentiated feedback could be provided, e.g. 1= wrong, 2 = struggling, but kind of correct, …, 5 = super easy. Based on the level of correctness, the spacing could be fine tuned.

I’m not an expert, and have not used my system for a long time yet, but after reading the literature, I became a bit skeptical of all these ingenious, fine-tuned (and sometimes super-secret), spacing algorithms. I would not be surprised if applying the KISS principle is the way to go.

Things I don’t like
Unfortunately, in DTTG V3, the ratings and other flags have been relegated one menu level down, since the Info menu is now inside of the “three-dot-in-a-circle” top level menu. So it is a bit cumbersome to set the rating for each card. That might be a deal breaker for quick-studies. It would be ideal to have something at top level.

Yes, I saw and read that topic. I also described something SRPish using ratings as the storage of the review history here last year. But then I felt that the 6 levels of rating where too confining. So I write the review history away in a custom metadata field with unlimited space, and use the rating only as a tool for making a review. It might be interesting to some day look at the review history, e.g. by exporting the card name and the history meta-data field for analysis in Excel. E.g. to find out whether the whole SRP thing actually works for me.