What determines whether a DB is available for sync yes or no?

In the past I have done my share of experimenting with sync’ing, so I have several options in the Locations column of Preferences > Sync.
On the right side column, showing Databases, one has 2 groups, LOCAL and REMOTE.

However, not all my local DB’s are available to each syncstore? What is the logic behind this?

How do I make a DB that is available in DTPO, also available for sync to a syncstore?
In the screenshot, DB named Library is not available in the LOCAL list? 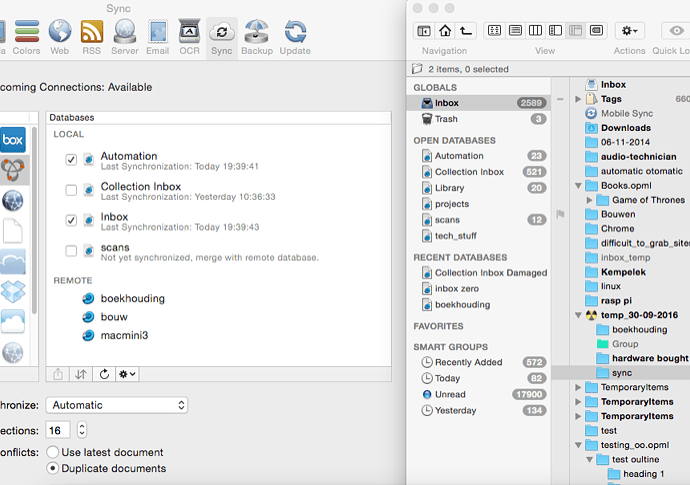 Think of it this way. You and the King of France both have libraries. You lent the King of France duplicate copies of your books “Automation”, “Collection Inbox”, “Inbox” and “scans”. You have a magic mirror that lets you see his library and your library at the same time. You can see he has those duplicate copies. But he also has some books he has never lent to you. These are “boekhouding”, “bouw”, and “macmini3”. With your magic mirror you can borrow a copy of “bouw” by control-clicking it in the “Databases” panel and using “Import Database”. As soon as you do that, then “bouw” will appear in your list of books-in-common with the King of France.

But you also have some books he doesn’t know about, like “projects” and “tech_stuff”. Since you have not set up the magic mirror so that he can see everything in your library, he cannot import a copy of those books for himself.

Just remember, when you select the Local Network sync store you are looking at the King of France’s library, you’re not looking at your own library. DEVONthink will tell you which of his books you also have a copy of, and which you do not.

(BTW, I can tell from your icons that the Local Network machine is running DEVONthink and not DEVONthink to Go.)

Korm, thanks for your everlasting support

The first thing that struck me, and, that I understood was that I was looking at the iOS icon of DT from your screenshot…

No joking,
It can indeed be rather confusing, but, …

I still suspect there is something missing here:
In the mean time a couple of hours have passed, so I do not really know what is happening in the background (AFP mount etc)

But, also, I have closed down and reopened DTPO.
But even then immediately upon reopening, the list was not refreshed or updated.
I must say, apart from this subject here tonight, I have already often times found that sync between my mac mini server and my macbook does not auto kick-in.
I’m in the habit of (nearly) never shutting down my macbook. Often days during travel and work it is not opened, and then again every 5 minutes so to speak.
Long story short, I already read if not mistaken from Bill that it’s a good habit to do some regular disk checking and restarting.

If I see timestamp differences on my macbook, I shut down DTPO and reopen, and then the auto-magic-sync starts immediately…

Now all of the sudden the LOCAL DB that I want to upload DOES appear…
I must say, I mostly leave everything automatic, but I have already considered (iOS beta) to propose for some more structured kind of logging that would be available somewhere in the menu.
I am aware of menu > window > log, but it is not specific enough, and I was thinking, in the case of sync, of something step-by-step and more specific so that a user can really follow along if need be.

Strange enough the ctrl-clicking does not seem to work…
Import DB is greyed out?

How do I make a DB that is available in DTPO, also available for sync to a syncstore?
In the screenshot, DB named Library is not available in the LOCAL list?

Let’s clarify: A Bonjour Sync Location is NOT a syncStore. Do not consider them the same.
A syncStore is merely a storage location.
A Bonjour location is two machines talking directly to one another.

If you have a syncStore location selected:

If you have a Bonjour location selected:

And this is the icon

Because, what I want is to ‘import’ or upload local(ly) open DB Library to my server syncstore.
I understand that it first needs to be imported, but don’t see how yet…

Think I got it:
I have to do the importing on a receiving machine.

Think I got it:
I have to do the importing on a receiving machine.