As the subject line states, I realize this is a petty complaint, but since tags final implementation is still in the future, I thought I’d voice it.

Can you 1) increase the space between tags in tag view 2) place the number of documents in the middle rather than bottom of circle icons and tags and 3) lighten the gray and purple/blue colors, also with more blue in the gray and less gray in the blue. 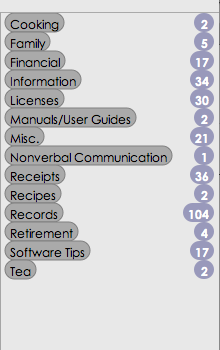 I said it was petty.

If you want to stay in the font family you’ve chosen for list and column view, but not have the “push-down” effect, try Optima or Helvetica (not Helvetica Neue).

I’m glad I said it was petty

Never crossed my mind it was a font issue. Thanks for setting me in that direction. Helvetica seems to work the best on my system for this purpose vs. the few other fonts that don’t create the “push down” effect. My problem is I “live” in the database for a good chunk of each day and have grown accustomed to Century Gothic’s face. So I will live with the mash up. Thanks again for the tip.

thanks for the bug report, the next release will improve the font handling.