Appending text from draft to a current Devonthink note?

I want to create a drafts actions to keep sending any thoughts I capture to 1 md note in DT.

I found here in this forum and old (circa 2018) post which seems to use this syntax which I used:

why am I doing wrong? any causes anyone?

I found here in this forum and old (circa 2018) post which seems to use this syntax which I used:

x-callback-urls are only supported by DEVONthink To Go (due to lack of automation tools of iOS in the past). AppleScript is recommended on the Mac.

AppleScript is recommended on the Mac.

thx guys I see. since I only know how to use x-callback-urls, does any one have a AS/JS example for this?

PS. this does seem to work on the Mac:

I assume that’s not x-callback-urls but rather something else?

It’s not a callback URL because it does not return anything. It’s just an URL command.

This whole thing has to go into a Draft action (if that’s the word) that you can run from any currently open MD document. Note I did not test this code! And you have of course first have to get the text of your current Draft document’s text. But that should be easy.

Thx so much @chrillek , this is a great starting point and ill use it to start exploring 'JS`!

As noted in the Help > Documentation > Automation > URL Commands section… 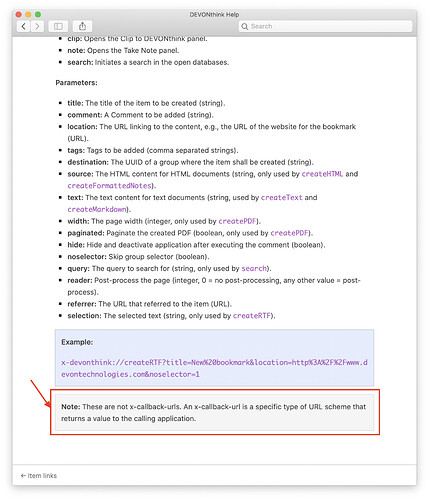 finally had some time to get back to this. I can’t see, to get it to work though

this is the current state of the code

when I run this I get an error 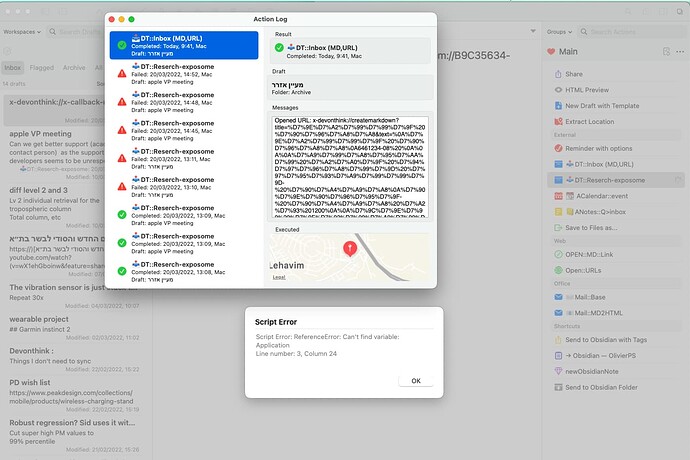 it seems line 3 is the one with const app = Application('DEVONThink 3');

why am I missing here?

Apparently Drafts does not use Apple’s scripting technology, so Application is not known inside Drafts.
I’m away from my desktop, so can’t explore further. You could check if Drafts provides for execution of shell scripts. Then you could run the JavaScript through osascript in the shell.

Are you creating separate notes to append to a Markdown document in DEVONthink?
Or are you adding to an existing Drafts file and replacing all the text?

thx guys!
@BLUEFROG , yes I want to append the text in a current draft to an existing md note in Devonthink

May I ask why you’re even using Drafts for this purpose?

Give that script the appropriate she-bang line and Drafts should be able to run it.

While it’s feasible, I’m wondering if it’s worth the effort. How often do you need this functionality, and why do you need it in the first place instead of simply editing the record directly in DT?

I want to create a drafts actions to keep sending any thoughts I capture to 1 md note in DT.

If I got you right and you want to append notes written in Drafts to exactly one note in DEVONthink why not give the notes a marker like a tag or a special part in the name which lets DEVONthink detect them and have Smart Rule/script add them to that note?

And if you used a Markdown app that unlike Drafts uses actual files and not a locked database you could handle this completely different. Simpler, that is.

this gave me some food for thoughts and I started playing with implementing this using obsidian instead of Drafts since as you said that uses proper .md files.

but Im running into issues…

first to get it into Devonthink I have tried using hazel to auto move any .md file to Devonthink based on the availability of the Devonthink tag and moving that file to a auto import to Devonthink folder I have on the mac, sadly this dosent seem to work

and here is the page section of the .md file

Also it seems like even if I do get it to import to Devonthink, I cannot seem to find in the Devonthink rules any option to append to a current file 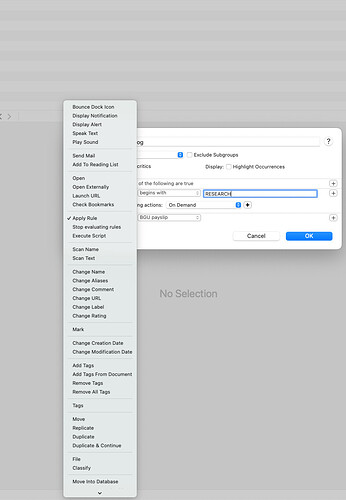 is that possible or did I misunderstood you?

There is no smart rule action to append to a file. Scripting is the only option in this case.

There are different ways to handle what you want to achieve. And a Markdown app that has an open file system (like Obsidian) offers just more options. Or to put it another way: With apps that have locked content you have to find solutions for problems which simply do not exist with apps using an open file system.

Let’s see what you could do (no claim for completeness here):

But that is of course up to you and how it fits your workflow.