Hi, I am modifying the template AppleScript for Daily Notes from Template Extras. The goal is to create/edit markdown file with format:

My script below manage to create new markdown file, but it always show error:

An error occured when adding the document. DEVONthink 3 got an error: Can’t get every text of content id 90087 of database id 2.

my modified script is:

It seems the syntax for rtf and markdown is different?
What seems to be the error, and also, where can I find the syntax reference for the AppleScript on DEVONthink?
Thanks in advance

It seems the syntax for rtf and markdown is different?

Thank you for the response.

by that, the creation line should be something like:

what about if the file already exist? will the flow be like:

what about if the file already exist?

URLs/UUIDs and names are usually completely different things and therefore you can’t specify the name of the note for the commands “exists record with URL” and “get record with UUID”, especially as the UUID is ready only and can’t be defined by the user via “create record with”. But here’s a slightly modified and working script but this supports only plain texts (as rich text scripting is really tricky): set temp to display dialog "What are you working on?" default answer "" set text_user_ent…

for those with the same goal as me, my working script is:

For the next goal, including the day’s weather forecast and current weather from https://wttr.in/?FT1 to the file.

Thank you for your help @cgrunenberg !

I’m Very interested in doing the same kind of thing, especially with the weather addition. Would you be willing to share your work? 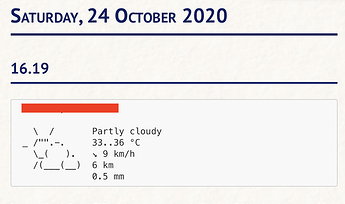 I might improve the above AppleScript sometime later, but currently quite busy myself. Do let me know if you’ve found the solution yourself! I will do the same