Applescripts to integrate DT2 with OmniFocus

I have added a simple utility script to this collection.

SetDBforOmniFocusFolder allows you to choose which DEVONthink database will be used for the selected OmniFocus folder. The default is “OmniFocus Notes”, but this script will offer you a list of the databases currently open in DT, and will store the path of the database you choose in the invisible note field of the selected OF Folder.

The current versions of the OpenProjFolderinDevon and OpenProjNotesinDevon scripts will then use the specified database for all OmniFocus projects enclosed by that folder and its child folders. (Except where any of these have been given their own database assignment by this script).

Working well here-thanks! Previously I had duplicated the integration scripts and hard coded each one to specific database as I did not use an ‘OmniFocus Notes’ database. That worked , but gave me additional clutter and complexity. This is a welcome addition.

This is also working for me. Like Greg, I had also edited the prior OpenProjFolderinDevon script so that the folder was created in the desired DTPro database. It worked, but this is much cleaner. Thanks for the hard for on this! I’ve been using these scripts for some time now and they’re terrific!

I’m not sure if this is possible but I’d like to know if it is possible to change the location within a DTPro database where new project folders are created. Because I use the Sync feature I would like these folders to be created inside of the Sync group/folder in my DTPro databases. Is this possible? If so, can anyone advise me how to accomplish this?

Thanks. I’ve spent some time lately studying Applescript but I’m not certain where such an option would be placed in the code below. Anyone have any advice on where to prepend “/Sync/” to the paths of new folders so that the resulting project folders in DTPro are created under the Sync group in DTPro?

You will find a new property at the top of each of the latest versions of the two scripts OpenProjFolderInDevn and OpenProjNotesInDevn.

Experimentation should, I think, reveal that they now create any new folders within the Sync group.

Any existing folders can be dragged or replicated into the Sync group without breaking the link from (or to) their OmniFocus projects. (As long as the note field of these projects contains a Devonthink hyperlink to the relevant folder.)

Thanks so much for making these changes. They seem to work just as you described although I had some older information in the OmniFocus folders and projects that caused some difficulties at first. This is easily remedied with OF projects: all you need to do is delete the hyperlink back to DTPro in the notes field. But not so easy in the OF Folders. My only way around old hyperlinks in the “invisible” notes field was to delete the old folder and create a new one that could then take the updated DTPro hyperlink.

Thanks, again. I really appreciate it. Your scripts have been extremely useful to me.

My only way around old hyperlinks in the “invisible” notes field was to delete the old folder and create a new one that could then take the updated DTPro hyperlink.

You should be able to clear a path from an OmniFocus folder by using the SetDBforOmniFocusFolder script and choosing the NONE option.

(First item in the menu).

This is magical - fantastic work, houthakker.

Though, as ever, wondering if it would be possible for one minor variation

- instead of storing oo3 files in the DT database for project notes, would it be possible to use just an opml file? I’d find this much more suitable to my requirements

And unfortunately, my applescript isn’t up to hacking this together myself.

These links no longer work. Any chance that someone here has these scripts archived??

He changed servers a while back-try this link.

He changed servers a while back-try this link.

Thanks, Greg – I’ve updated the link at the top of the thread now.

instead of storing oo3 files in the DT database for project notes, would it be possible to use just an opml file?

My memory is that if we import an OPML file into DT, DT generates a matching directory structure rather than a simple file. Perhaps others can correct me on that, or point us to a way of circumventing that response. (The obvious thing would be to change the file extension to .TXT, but would the plain XML text source of OPML really be a good vehicle for your notes in DT ? See attached …)

In the meanwhile, I have personally switched to using FoldingText’s Markdown-enhanced plain text outlines for my OmniFocus (and other) notes - they are light-weight, easily repurposed (and easily formatted through Marked ), and I find that they work very well in DevonThink for preview and search. (I had experimented with Tree, also an excellent and interesting outliner, but I found its previews a bit too small and illegible to work well with DT).

I may wait a moment before I post an update which offers the option of using FT outlines – the FT scripting interface is being extended and reframed right now, and may offer new food for thought 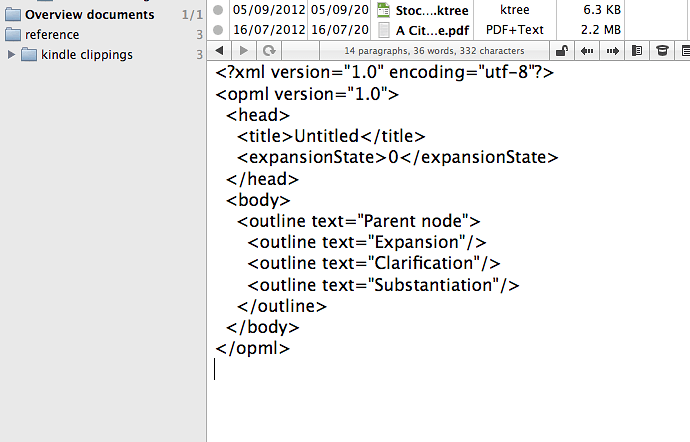 In case anyone wants to experiment with using FoldingText plain text outlines for their OmniFocus notes (in lieu of OO3 notes), version 214 of the Project Notes script at http://bit.ly/OFOC-Devon should allow this.

There is a property at the top of the script:

If FoldingText is installed on your system, and you edit the above value to true newly created project notes should be used the FoldingText file format and extension - plain tab-indented text (optionally with Markdown adornments) and, by default, the extension “.ft”

I personally find FoldingText supports a very good intersection of the benefits of outlining and plain text - rapidly searchable, flexibly repurposable, and readily editable in DEVONthink for quick plain text adjustments. An interesting scripting interface too …

Thanks for sharing this-works like a charm here-very timely! Just last weekend I converted the last of my OO3 documents to text format as I’ve given a long-time friend OmniOutliner a rest.

Thanks for sharing this-works like a charm here-very timely! Just last weekend I converted the last of my OO3 documents to text format as I’ve given a long-time friend OmniOutliner a rest.

One solution would be to import the OPML outlines into FoldingText outline format. I’ve drafted a script for doing this, of which you can find ver .007 at goo.gl/MeB9J

(and if you need a return trip back to OPML, I’ve drafted another script, with an FT to OPML export option)

Thanks for all the Folding Text scripts and ideas! I’ve also put OO3 on the back burner and turned to FT.

Good, I’m glad that’s useful, and yes, OO3 has been a good workhorse, and I happen to be using it this afternoon for an application which requires columns, but I do find that FoldingText works better for keeping note outlines in DevonThink.

(And there are cases in which FoldingText key/value tags and properties can actually be a bit more flexible than OO3 columns).

I found conversion from OPML to Folding Text / TaskPaper goes perfectly well but not so the return trip, from .ft or .taskpaper to OPML. Are there any updates to these scripts?