Are Smart Groups synced to DTTG?

Thanks for the awesome quick responses - no worries on them, was just wondering if I had found a bug…

Actually we think of it as the “Don’t show it and get people upset it’s not working, but let’s make sure they’re there for the future enhancements” feature

You could also read through the lines with these answers

Indeed you could, especially as we’re always hard at work on many things in here.

Just want to put my hand up to looking forward to Smart Groups in DTTG. I mean now that you’ve done DT3, fixed most of the bugs, had a little rest - I wouldn’t want you all to get bored or anything.

It’s on the list… and yeah, we’re definitely not at a loss for things to do

There is possibility to partially recreate this functionality using replicants and smart rule https://appademic.tech/devonthink-3-reading-and-research-2/

Just wondering if it’s now possible to sync Smart Groups to DTTF – or if this is still in the works.

No change here.
Local smart groups in DEVONthink sync silently to DEVONthink To Go, but are hidden by default as they aren’t functional at this time.

Any progress on this front? I use smart groups to organise my documents so DTTG is not much use to me without them.

DEVONtech do not publicise their road map - so barring the feature being ready to publish next week you will never get an answer to that question, sorry

Thanks for the info @Blanc. @BLUEFROG , this would really be an excellent improvement to the app, if at all possible!

Much progress on this front?

DEVONtech do not publicise their road map - so barring the feature being ready to publish next week you will never get an answer to that question, sorry

And DTTG 3.5 does not sync smart groups.

I have the same issue.

Fair warning, the solution I have may be a little janky

My workaround is to create a smart rule instead, and have it sends replicants to a designated folder.

For example, I initially created a Smart Group for things to listen to later (usually in the car, so I need the group available on DTTG).

When I realized that Smart Group didn’t show up on DTTG, I created a new regular group (same name as the Smart Group) and created basically the same rule as I had set up for the Smart Group: When tag is “Listening”, include in Smart Group.

I applied that same logic to a smart rule, but at the end of the rule, I have it create a replicant and send it to the regular folder that I created, since the regular folder DOES show up on DTTG. (See attached file for reference.)

NOTE: I first have to move the file to a holding group. I called the group I moved it to “Listening (To Process).” The reason to do this is that, if the file is in the inbox, it will not create a replicant for some reason. I’ve noticed that I cannot replicate a file IN or TO the inbox at all; it must be in a database first before I can replicate it to any other group. (Again, see attached file). I would rather leave these files in the inbox so I know they need to be processed (i.e. that I can add tags and send them to their final destination within a group later), but this is just part of the jankyness I have accepted lol. To deal with this, I copied the URL to the group and added as a recurring task to my task manager to periodically go into that folder and tag the files + send them their ultimate destinations.

After moving the file to this group, I then have it remove the “Listening” tag and add “Listening (Added)” instead. This way, the rule doesn’t keep finding that original “Listening” tag in in a perpetual loop, but IS tagged with something similar that I can search for / filter by later.

Last, I made sure that the group was set to “Always Download” on my phone so that I can always grab the files as needed on the go.

It solves the issue for me in the interim. Hope that helps. 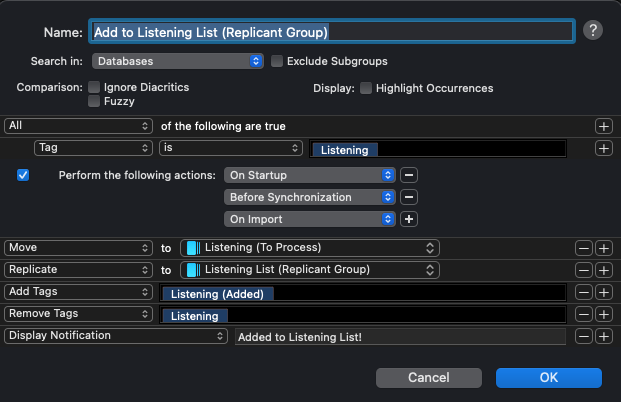 Quite the workaround! Hopefully the Devonthink team can sort this soon.

Smart Folders in DTTG: an approximate solution DEVONthink To Go

This can actually be automated via a smart rule script: -- Mirror Smart Groups -- NOTES: -- - The smart rule should search only for all or certain smart groups (in one or all databases) and use the trigger "Before synchronization" -- - We add only additional replicants to the mirror, it's up to the user to move all instances of undesired items to the trash on performSmartRule(theRecords) tell application id "DNtp" repeat with theSmartGroup in theRecords if (type of theSmartGroup as stri…