so you’re saying i’m correct, that a tag called york, pennsylvania if marked as an alias will see that as two different tags? is there a way around this? if we can use commas in tags shouldn’t we be able to use them in aliases, as well?

An alias is not a Tag nor is it a form of tagging, so no I wouldn’t expect that to be the case.

it is if you use the assign tags smart rule, no?

I am saying aliases are not a form of tagging. You can use them in whatever ways you see fit, but that is not their primary function so I wouldn’t say they should conform to the same parameters as tags.

but my point is theres a rule created by dt3 that does use them as tags. and so if that rule exists, there should be a way to make sure they do conform to tags. otherwise people may be using that rule - like me - with an understanding that dt3 would have the two functions work together if they were going to create the rule.

What specific rule are you referring to?

@BLUEFROG @cgrunenberg is there anything I can do about this? maybe is there a way to put quotes around tags with commas that become aliases upon merging?

Currently there’s no workaround but we’ll consider this for future releases.

ok. given the fact that commas in tags was something people really wanted, I am sure I am not the only one who may be encountering this problem – and then this really awesome smart rule you all have may actually end up messing up a lot of people’s organizational tactics. this functions more like a bug and less like an aspirational feature so i’m hoping there’s a resolve at some point.

Actually you are the first person I have ever seen trying to use aliases in this fashion, especially in conjunction with tags.

Using aliases is typcially done by people using WikiLinks, as that’s the genesis of the feature in this context, not tagging.

I understand that. but my point here is that these are automatic processes dt3 created. If you merge tags, one tag becomes an alias. if I use the smart rule “assign tags”, it checks for aliases. but it doesn’t check for aliases in the form they were created. I understand maybe not everyone uses these functions. but I do, and i did not create the processes here. DT3 did. i don’t think its too much to ask that they function in tandem in a logical way if they were created by the developers. i’m not asking them to adjust to me. i’m asking that the tools you all create make sense when put together.

would my problem be solved if I replaced each comma with an asterisk? I.e. instead of the alias being york county, pennsylvania, it would be york county* pennsylvania? thereby accounting for the comma if it encountered it in search?

I’m encountering this same issue – I have wiki-style aliases that need to have commas in them.

Say, for example, I’m linking to various places in Massachusetts. One of these is Franklin. But – there are two places named Franklin. One is a town, and the other is a county.

In my documents, I differentiate between them by referring to them as:

VoodooPad does this easily, so, it’s a bit disconcerting to lose all that embedded usefulness as I migrate over. Still worth it, but, it would be great to have a solution. I’m working with hundreds of locations, many of which need to be disambiguated name-wise from each other using normal location naming conventions – which do include commas.

A couple of illustrating examples attached, showing the no-longer-serving-as-one-alias locations under “Appearance in Transcribed Records”. 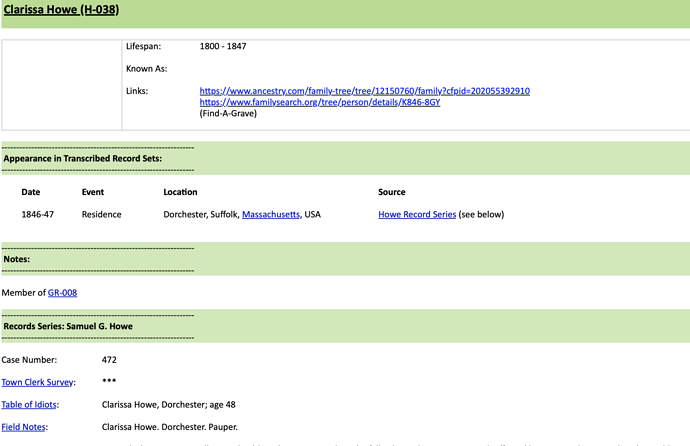 Perhaps this script by @pete31 is what you’re looking for? It works like a charm as part of a smart rule.

Perhaps this script by @pete31 is what you’re looking for?

Definitely going on my to-do list for the future – thank you! – but right now, too steep a learning curve. I haven’t reached using scripts beyond the very basics yet.

Since titles of documents accept commas, I ended up going with renaming all my files with the most important version of the name with commas (smallest to largest – as in, “town, city, county, state, country”) and using a convoluted sort of groups nested within groups nested within groups to approximate the navigation functionality through the files that I lost by having to jettison the more important for file name clarity, largest to smallest (as in, “country, state, county, city, town”), from its place as the title. It’s a bit round-about, but, it’ll work.