I’m a newbie in using DevonThink and i have just come across a problem that i can’t seem to solve.

I have a folder full of academic papers that i find and download by using the program ‘Papers’.

I want this folder to be indexed in DevonThink and every time i add a new pdf to the folder i want DevonThink to update automatically.

I thought this was done by using the Action Index script, but by the love of god i can’t make it work. Here is what i have tried so far.

Now i have no idea how to proceed. I have been browsing through this forum and i think i am doing it like it is described in several other posts here. However i am beginning to wonder if i have to change anything in the script itself? Currently i am using the ‘out-of-the-box’ version.

All help appreciated - and this is the first time i am setting up a folder action/automator/apple script, so yes i am a complete noob here

Folder actions are only used by the Finder but you could use Synchronize.scpt (see Disk Image > Extras > Scripts > Examples) instead.

Yep that solved all my problems! Thanks!!!

Testing how well this works. I deleted an item where it resides then I execute the script (index for all databases) and the item still showing after.

It deletes(not show) the indexed file Only if I highlight >File> Update Indexed Items.

Update Indexed Items: Indexed items are updated when you view them. If you need to be sure everything is up-to-date use this command. If nothing is selected, the enclosing group of the current group is used. It also reads changes made to the Finder or Spotlight comments of the to-be-updated files and applies the changes to the files’ counterparts in the database. Finally, this command removes indexed items that have lost their external counterpart. It does not affect items moved manually to the group.

Why do you need a script? And what script are you referring to?

There is script in “more scripts” that doesnt seem to work. and yes I know the File>Update Indexed items works fine that is if the item isnt move to another group.

What script are you referring to? There is no longer a Synchronize script available in the More Scripts of DEVONthink 3.

I tried what was said in this topic but it doesn’t work. Could you explain once again how to update indexed folders? Thank you!

Update: it worked with a file stored in my Desktop, but not in iCloud (where the folder is locally downloaded).

Update 2: it worked if I put my folder on the root of the iCloud Drive folder… So that’s what I will do!

From Help > Documentation > In & Out > Importing & Indexing > Indexing and the filesystem… 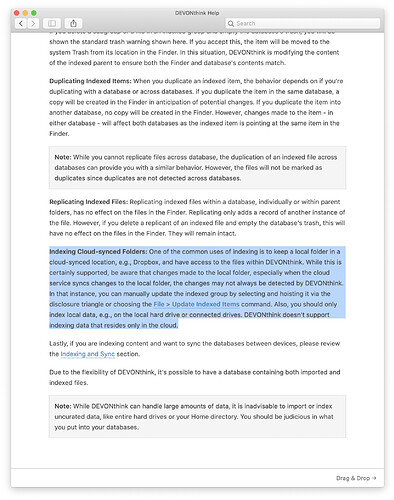 I have already read it, but as I said, the data I was trying to sync was not only on the Cloud. I solved it placing my folder at the root of the iCloud Drive folder, where changes where detected.

When my documents where in the iA Writer folder (fully downloaded on my disk), changes where not detected, even after clicking on Update indexed items. But I don’t understand why.

However, thanks for your answer.