I have had DT for awhile but have never used it much. But I just updated to version 3 and now want to use it regularly.

I have just created a database from a folder on my mac and allowed it to complete it’s indexing.

I now add new items to the folder on my mac. Should those automatically be added to the DT database? Mine dose not.

If so is there some option I need to check to make it happen?

Here is the structure of the database 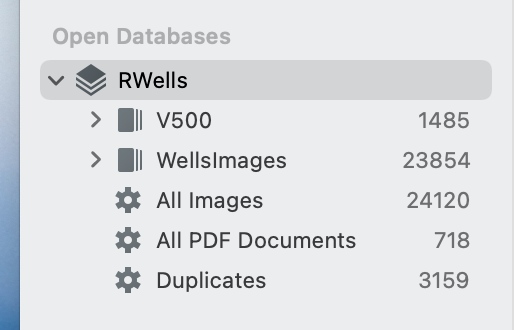 At this juncture it probably would be a good idea for you to read and understand Indexing, as written about in the Chapter “IN & OUT” (page 52 of the Ver 3.8.4) of the outstanding “DEVONthink Manual”. Automatic updating is discussed. There are also other considerations about indexed files when operations outside DEVONthink makes changes to the index file system.

You have, in fact, imported the data into DT; that means that a copy of the data actually resides in the database. There is no further connection between the data in the database and the source from which it was imported. Changes made on either side will not be reflected on the other side. Any mention of the word index you may have seen was DT creating an index of the contents to aid you in searching.

The alternative to importing is indexing; when indexing, the data is left in situ and not moved or copied into the database. The database only contains a pointer to the data, and in addition any metadata you create in relation to that data. In this structure, changes made on one side will be reflected on the other.

It is important to recognise the advantages and disadvantages of both importing and indexing. The default structure is an imported database. Indexing can be useful when you need access to the files from a non-Apple-device, or with software which creates its own support files or structure, or when including files from an online location when local space is constrained. Be aware that indexed content can be included in sync locations.

Thanks to both of you. You are right. So I spent some time with the manual this weekend and I’m ready for a new week of experimenting.