Best practices for moving from external files to internals

Hi,
I have been using DT for a year now, and started out indexing my iCloud folders, which doesn’t seems to be the best idea.
I have made a few test of moving the files into the database via the Menu, but that seems to be more for a few files.
So is there a better way to move this files into the database, and at the same time delete the iCloud folders which now should be empty?

I have made a few test of moving the files into the database via the Menu, but that seems to be more for a few files.

I’m not sure why you’re coming to that conclusion.

Also, if you select an indexed group and choose Data > Move into Database, the entire Finder folder is imported as a group and it doesn’t leave it behind in the Finder.

Hi
I just did a move to Databasefor a folder with a child folder [Dialog], when I do Show in finder, is now showing that the folder [Dialog] containing 7 mails .eml is still in the file system, but missing in Devonthink now.

Doing a repair database log show that the mentioned data is missing, so these .eml files in the child folder where not moved into the database and is apparently being as moved to database, but they are still in the folder.

But this way don’t seems to be a visible way to import thousand of files and folders.

I tried the same and it worked perfectly.

Only one thing to mention: I could not select the indexed folder in the sidebar, I need to select it in the main window.

I then exported the folder again and could have indexed it again (after removing the imported content).

The exported files even had the original timestamps - fantastic!

I only tested with one folder and some files, I selected all of them together and yes, they vanished from Finder.

I don’t understand you last point.
I think, everything will be exported as expected - you can just try yourself.
If unsure, create some test directories and files for this.

I don’t understand.
You can select and export whatever you want.

The whole database, or whatever you selected in the main window.

You seem to export single files, but finally I just don’t know and understand your use cases.

For me, indexing content and then importing into the database seems to work fine. The same for exports.

In the item list, you can select the group, not just the document.

A screen capture could be helpful.

I just did a move to Databasefor a folder with a child folder [Dialog], when I do Show in finder, is now showing that the folder [Dialog] containing 7 mails .eml is still in the file system, but missing in Devonthink now.

The behavior you are describing is exactly what happens when you index a Finder folder and then move some of the contents to a different group in DEVONthink. The documents are still in their original location in the Finder, unless you explicitly change that in DEVONthink. Once you move an indexed folder into the database, the original folder in the Finder remains along with any documents that were moved to different groups in the database. I’m speculating that you will find those 7 emails in other groups in your database.

Hi,
I have marked the Folder Karlebo … but the Move to Database is not mentioned.

What I really would like it to move alle the Data in a Database into the database. 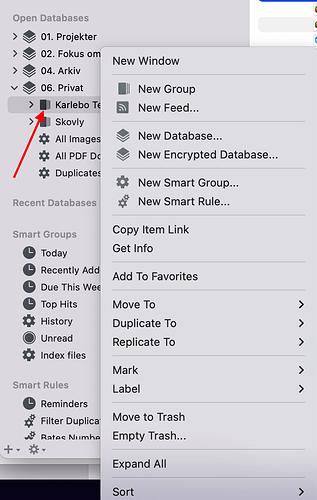 the Move to Database is not mentioned.

Yes, it’s not available via a group’s contextual menu in the navigation sidebar.

Use the group’s contextual menu in the item list (or one of the other views, i.e. the „main view“) instead.

@pete31 is correct here. The Navigate sidebar is for navigating

Functions like moving things into a database are available in the item list where you deal with a database or group’s items.

"Not imported" Smart Group
After import Into database, is there a way to make a Smart Group showing files that where not imported i if any, I assume I could use the path such as ~/Library/Mobile Documents/com~apple~CloudDocs/ but I don’t see “Path” as an option in Smart Groups?

The toolbar search query is item:indexed. You can set up the same query in a Smart Rule.

Thanks for prompt reply… have a great weekend