Bonjour syncing: why did DT just create a 4GB datastore?

When moving to DT3 I was confused about syncing for awhile, but after realizing that bonjour syncing was exactly what I wanted, I unchecked the cloud locations in the Sync preference tab and deleted the “Macintosh.dtstore” file which I could tell was over 6 months old. Since then I’ve had weeks of successful syncing with 2 macs and 2 iOS devices. Suddenly tonight on reopening DT3 after a crash, I watched as the activity message at the bottom of the sidebar read “syncing to DTStore” or something similar, scrolled for the span of 16,000 items, and indeed, there’s a brand new 4GB file in my Databases folder. I’ll delete it, I suppose, but it’s a little unnerving and definitely mysterious. The settings for sync don’t appear to have changed, so I’m at a loss to understand. Thanks for any insights…

A screenshot of Preferences > Sync plus the full path & name of of the new sync store might be useful, thanks.

Thanks for requesting. Picture below, and the path is ~/Databases/Snowden.dtcloud 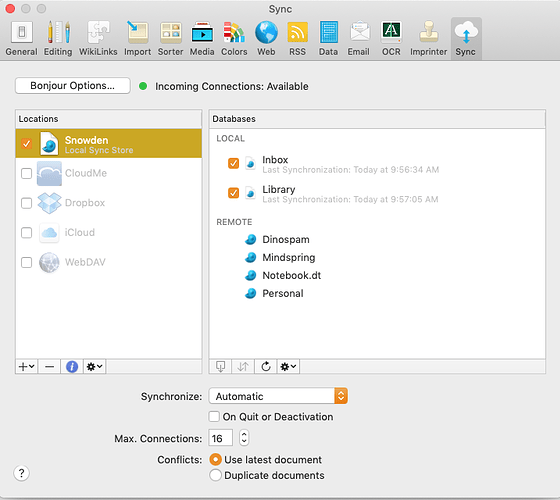 Could you mean a .dtsyncStore ?
If so, that would be an old Sync 1 sync store and no longer used by DEVONthink’s sync engine.

The current sync engine uses a .dtCloud file, which is exactly what you show actively syncing here.

Yes, I did mean .dtCloud: is that used for Bonjour syncing? I assumed not, since my idea was that Bonjour syncing was direct database-to-database. If I’m wrong, then I can live with a 4GB hit to disk space. The reason I deleted my old data store from DT2 was that it was 185GB!

No, a Bonjour sync is direct, machine-to-machine. 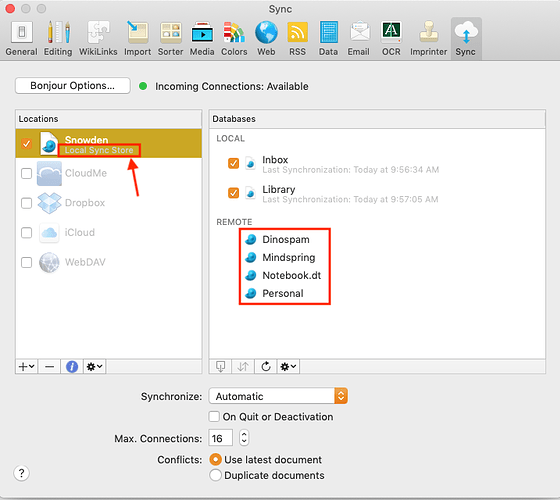 Yes, that makes two of us (confused). Should there be zero checkboxes checked under “Locations” if I’m only interested in Bonjour syncing? This is the first time this idea has occurred to me, i.e. I always assumed that Bonjour syncing required a local location… I’ll give it a try… Thanks for your patience with a dummkopf.

Thanks all, my setup is now back to what it should be (one checkbox). So much for the “turn on everything” approach…