When I was using clip to DEVONthink recently, the editing of web pages often failed. No matter what format I choose Rich, plain, formatted etc., it will eventually become bookmarks. 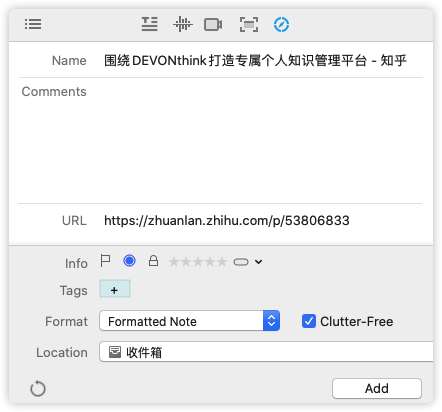 After a lot of testing, I found that there is a success rate of one in twentieth.

A bookmark is captured when DEVONthink’s clipping extension encounters an error.

Does it work without the clutter-free option?

Even after rebooting the computer?

@cgrunenberg I don’t normally have the problem that @ma3252788 is describing, but I have also been experiencing it quite a bit over the last few days.

I normally use the web clipper to capture pages as formatted notes with the clutter-free option. But, lately, they always seem to come back as webloc files. However, the problem seems to go beyond the web clipper, since my RSS feeds that use the same format settings are experiencing the same problem (i.e., they’re just coming back as webloc files).

In the past, this used to only happen once every couple of weeks or months, and I had always assumed it was just a server load issue. Because, if I waited a minute or two and clipped the same site again, it used to work just fine. Now, however, all I’m getting are webloc files.

You already have a support ticket open on this issue and its in Development.

@BLUEFROG If you’re referring to the RSS issue, that’s partially correct (though, to be honest, I’m not entirely sure how a problem with the one specific RSS feed mentioned in the ticket relates to this global issue). Nonetheless, I have not reported any web-clipper problems until now. Would you like me to open another ticket? Thanks

Ahh. I thought this was mostly predicated on the RSS issue. I must have misread you.

@BLUEFROG No problem - for all I know, the two problems may very well be related.

In any case, I’m not sure if you guys did something on the backend, but this particular web clipper problem seems to have resolved itself again. Now, when I use the web clipper to capture a webpage using the formatted note and clutter-free settings, it is capturing everything appropriately (i.e., I’m not getting webloc files). Everything looks good again!

Out of curiosity, is this a problem with the web server that handles the cleaning/clutter-free option? Thanks again!

Out of curiosity, is this a problem with the web server that handles the cleaning/clutter-free option?

Not that I’m aware of but perhaps there is something logged. We’ll have to look.

Yes, I agree with what you, now it works again, and I don’t know what makes it work. Some websites are still bookmarks, which is strange and feels very unstable