Cannot delete some files orphaned by DEVONthink To Go

viewable in the document thumbnail

I misspoke when I said document thumbnail, as what I intended to say was the document preview. I currently have 3 orphaned DEVONthink to Go documents, a plain text, markdown, and PDF. Only the PDF shows a thumbnail, but all 3 documents when selected show a full preview of the first page. 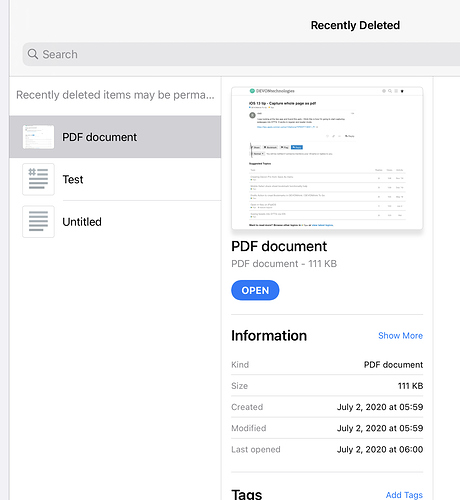 What if you long press on the document and select info, does that show a preview?

Nope, the preview window (long press and pressing ‘i’ for more information) shows only an icon. The information item is the only item available, there’s no ‘delete’ option for these ‘ghost’ files.

there’s no ‘delete’ option for these ‘ghost’ files.

That’s correct. The Files app is extremely limited in its possibilities. It’s on the radar here.

Yep, similar situation to what I am observing on an iPad running iPadOS 14.0 and which may have existed on iPadOS 13.x but I hadn’t noticed previously. Similarly, I am not observing this issue on an iPhone (which was also just upgraded to iOS 14.0).

These “deleted” documents, are they actually accessible? Because the original file is long gone by then.

On an iPad now running iPadOS 14.0 which I have just very recently observed this phenomenon on, the deleted DEVONThink To Go files appearing under Recently Deleted in the Files app can not be read or opened from my attempts to do so, at least not through the iPadOS user interface but maybe they can be parsed programmatically through APIs? I have no clue. But I agree with @Greg_Jones this is still kind of a privacy risk from a metadata point of view since filenames can convey information and what other apps on an iPad or iPhone might be able to parse a directory listing of orphaned Recently Deleted file names and could “phone home” by sending such a list of names off to never never land somewhere? Maybe this is just one’s imagination running wild but it is probably better to have a wee bit of imagination surplus than imagination deficit when it comes to privacy and security.

The question is if we as developers have any possibility to remove them from there. Do you see this behavior with other apps, too, like GoodReader etc.? We already ask the file provider mechanism to delete the files but, as far as I can see from here, there is no option to ask it to not list it in Recently Deleted.

Do you see this behavior with other apps, too, like GoodReader etc.?

You know that I have been reporting about this for months now, and I can say, with zero exceptions, that this issue is unique to DEVONthink to Go. I literally have hundreds of folders and documents on my primary iPad that I cannot delete because they are orphaned by DEVONthink to Go.

Picking one random document, and displaying the info for the document. 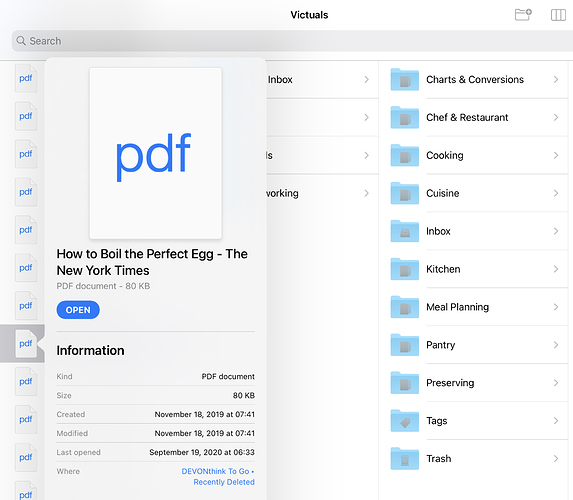 Adding one more piece of info that may be helpful, my database documents are 100% indexed, so that it what is appearing here. Limited testing suggests that documents created in the database of DEVONthink to Go are NOT orphaned in the Files.app.

my database documents are 100% indexed,

Are they indexed from iCloud Drive?

Adding to this thread and @Greg_Jones observations, I have not seen any orphaned files in the Files app on iPadOS 13.x or 14.0 so far. I do not use iCloud with DEVONthink To Go. What remains unclear so far is why the orphaned files are observable on iPadOS but so far not on iOS running on an iPhone. Is there a nuanced issue with regard to iPadOS which does not affect iOS? Apple has quite probably made things more complex for developers by creating a fork of iOS, iPadOS, while also maintaining the main iOS line. Sigh.

I would think that in this regard there are no differences between iOS and iPadOS. The changes are more on the UI side.

We’ll have a look why these “ghosts” still appear in Files even though they are definitely already gone in DEVONthink To Go.

Upon configuring Security, I entered a Passcode and enabled Face ID. I then also kept the default setting of the “Immediately” slider all the way to the furthest left, and noticed the red text underneath the slider calling to to my attention: ’ “Immediately” locks this app as soon as you switch to another app but also breaks integration with the Files app." ’ This setting in Security, as it calls attention to Files app, might prove interesting and perhaps related to the “ghosts”. Quite frankly, I do not remember if I had “Immediately” selected for DEVONthink To Go on the iPad prior to deleting and re-installing it today, but “Immediately” is configured for the iPhone and, like @Greg_Jones, I have not observed the Files app “ghosts” on the iPhone. I will keep the “Immediately” setting on the iPad, no part with the iPhone, going forward, and look for future “ghosts” on both iPad and iPhone and report back if I see any phantoms.

Quite frankly, I do not remember if I had “Immediately” selected for DEVONthink To Go on the iPad prior to deleting and re-installing it today, but “Immediately” is configured for the iPhone and, like @Greg_Jones, I have not observed the Files app “ghosts” on the iPhone.

Actually I have seen this on the iPhone, I mentioned above in February how I had deleted DEVONthink to Go on my phone to clear them out. You might have seen another post above where Jim asked if it was common for me to access DEVONthink to Go documents via the Files.app, and to that I replied not on my phone.

To recap, I’ve seen the orphaned documents on both my iPads and on my iPhone, it just depends on which device the documents were deleted from as they do not sync across devices. I rarely see them on my iPhone, but only because I don’t do much file deletion/organization on my phone.

Hi @Greg_Jones thanks for jogging my memory, that seems right, about my recalling that part of your conversation in the thread. I suspect you and I may share some similar use case patterns such that we are probably both using iPads for more file organization (including deletion) v.s. iPhones. I like having a synced copy of my DEVONthink resources on the iPhone since it is the most pocketable mobile device. The iPads, with iPadOS including mouse / trackpad support as well as the introduction of Apple’s Magic Keyboard, are becoming more useful for file org.

NotePlan and OmniOutliner are two examples of apps that move documents deleted in the app to the Recently Deleted section of Files.app. I expect this is not uncommon, but it’s also not something I had reason to track.

I can see the effect you’re describing. Working on it but it might require de-installing and re-installing the app to clear the list as the Files app seem to have no way to remove files for which the identifiers are already gone.