I have been using DEVONThink Pro Office for a while and really like it.

Today I posted some photos to the formatted note, yet the orientation is wrong - but before I send it, I made sure it’s the right orientation in Photos app (Mac).

Wonder how to change orientation of images?

You can’t easily do this, as it’s embedded encoded data.
How are are you adding the photo to a Formatted Note?

You can’t easily do this, as it’s embedded encoded data.
How are are you adding the photo to a Formatted Note?

But added them how? Long-press in a Formatted Note?

macOS provides “Markup” tools for images, but the tools are not accessible in Formatted Notes. They are however accessible in RTFD files. So, in DEVONthink, convert the formatted note to RTF.

Once converted, look for the access point for Markup tools while hovering over the upper right corner of the image - click Markup 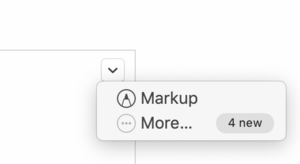 that will give you access to the image markup tools which include rotate, etc.

After the edits and file are saved, then you can reconvert the document back to Formatted Note if you wish.