Changing the file name for Save PDF to DevonThink Pro

Each time I print from Mail to DevonThinkPro using the Save PDF to DevonThink Pro script I get the same filename. It’s the name of whatever email I previously saved as a PDF to a folder.

The script (though I can’t seem to get into it) appears to be pulling up the previously remembered PDF file name rather than pulling the email title.

Any ideas on where to start looking for a fix would be great. I can’t find anything in the forums so far.

The script (though I can’t seem to get into it)

It’s not a script. “Save PDF to DEVONthink Pro” is an alias to the DEVONthink application – the alias is found in ~/Library/PDF Services. The way these PDF services work is that OS X gets the content and document or window name (depending on the source application) and sends it to the target (aliased) application. Results vary, but usually Mail is consistent in sending the subject line of a message, which is then used by the receiving app (DEVONthink) as the PDF document name.

Over here, I’m not able to replicate the problem @quantumgardener describes – but it is easy to check. Set DEVONthink > Preferences > Import > Destination to “Select Group” and then try printing a PDF using “Save PDF to DEVONthink Pro”. The group selector will open in DEVONthink asking for the destination group in which to place the PDF, and (most importantly) showing in a editable text box at the top of the selector the name that DEVONthink will give the document.

If the problem persists, perhaps a reboot would clear it – it might be a stuck queue – and using “Select Group” for imports always offers the opportunity to name the document.

Select Group confirms the filename is not picking up correctly. This is persistent after several reboots. At least this way I do have the opportunity to rename it.

Strange. Since DEVONthink only knows what OS X print services and Mail tell it, I don’t see how DEVONthink would know the name of the other document unless it received it from print services. So, the problem is probably not DEVONthink. You might find some insight if you posted the question at the Apple Support forum

Before I get to te apple forums ill try printing to Evernote to see what it does and then and uninstall, reboot, reinstall of devonthink.

Reinstallation did nothing. I’ll live with this for now and follow up another day.

Tip: To rename any document that contains selectable text, that would provide an appropriate Name of the document, select a text string and press Control-Command-I.

In the case of your PDF capture of a Mail message, select the Subject text in the PDF as an appropriate document Name.

Version 2.5.2 has fixed this functionality in my install.

I am encountering the same behavior using the “save PDF to DTP” menu option from the print dialog in Safari. DTP Office 2.5.2. This really gets in the way of an efficient workflow. 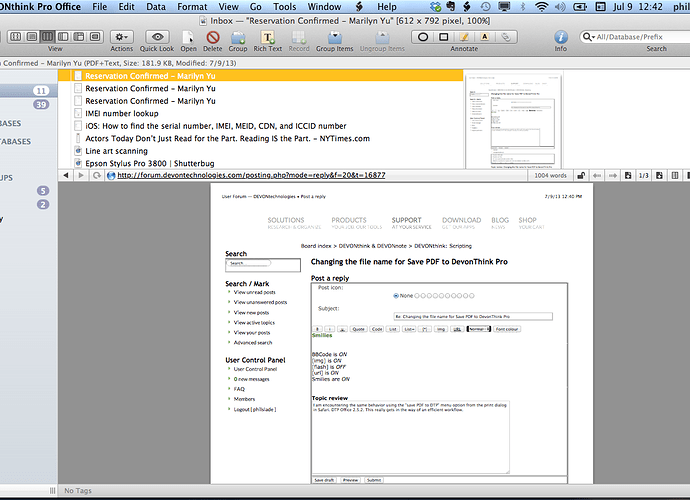 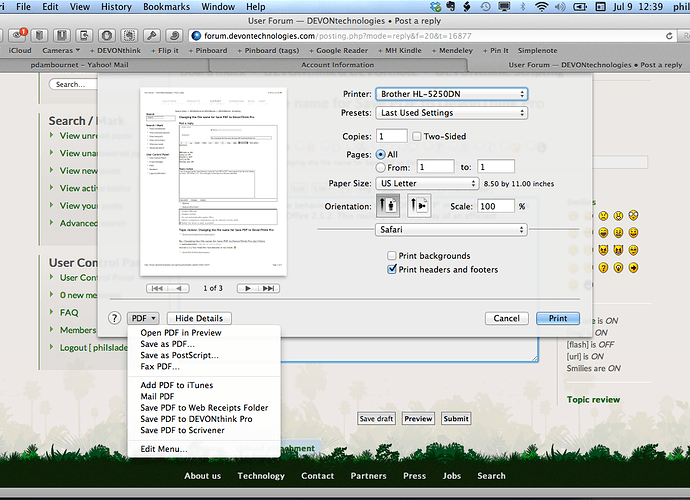 @philslade: I don’t think you will find that capturing Web pages from the forum as PDFs is an efficient workflow.

The last point above is critical, if you are trying to document useful scripts. The PDF often won’t include the entire script.

I usually capture only a selected area of a Web page, as rich text. That’s the most file size efficient format that will include formatted text, images, tables, lists, images, ‘box’ areas such as those that hold long scripts, and hyperlinks. Selecting only the desired area will exclude extraneous content and so improve the efficiency of searches and the AI assistants such as Classify and See Also.

Example: Comparison of captures of a forum discussion, Removing a part of the name of a number of entries

Capture as PDF: 315.5 KB; most of the script was’t captured, so the documentation is useless.

Capture of the posts in the thread as rich text: 60.4 KB; the full script is available for copy/paste to the AppleScript editor, and extraneous content wasn’t captured. And no issue with the document Name.

Note: Don’t try to use Chrome or Firefox for rich text capture, as neither browser properly handles OS X Services.