I have Safari Technology Preview installed on my Mac running 10.13.1 and sometimes when I try to clip a website using the DevonThink Clipper ( 1.2.6 ) , it opens in Safari, and I get a blank extension, as shown by the screenshot. I have even uninstalled the Safari Extension and it still opens Safari.
This happens until I reboot my computer. Obviously I should not have to reboot my computer when this happens. Any suggestions, besides rebooting? 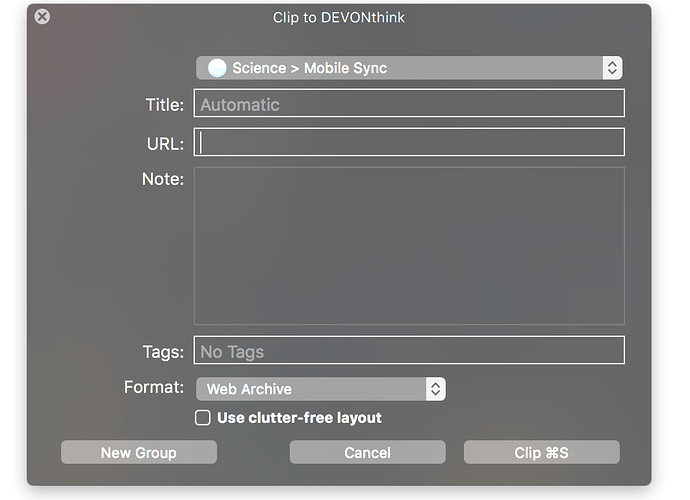 If you’re expecting the extension to work properly with the Safari Technology Preview, I wouldn’t. It’s not really even beta software at this point.

Any suggestions, besides rebooting?

Maybe not expect DEVONthink to work as designed when you’re using speculative, alpha or beta products produced by someone else?

I don’t mean that to sound blunt – it’s hard enough to keep up with the bugs Apple puts in its final release products, let alone the bugs in its speculative experimental software.

I’ve been using Safari Technology Preview ever since Apple started releasing them in 2015 and I have not had this issue crop up… I would not consider it Alpha, or even Beta software.
But if no one is willing to guess on a possible solution I can use Safari.