Clip to devonthink no longer works in Firefox 57

From version 57 (which has just been released in the Firefox Developer Edition), Firefox only supports the newer WebExtensions framework for plugins and the devonthink plugin thus no longer works. I think however that the new framework is similar to that used by other browsers (chrome?) so I hope it will be a fairly quick fix. More info here: support.mozilla.org/en-US/kb/fi … odernizing

I rely on the extension in my daily work so would be most grateful if you could look into it promptly. Thanks.

Noted but Firefox 57 is not the public (stable) build. You should use 55 for proper operation at this time.

Thanks for your reply. The (new) framework for plug-ins (WebExtensions) was finalised in v.48 released in August 2016 as a “public” build… the change in v.57 is that the old framework is no longer supported.

You are of course correct though that Firefox Developer Edition is labelled as a “beta” release, but it’s provided with features for web developers that the regular releases don’t have so I suspect I’m not alone in using it as my regular browser.

The link should be:

Where did you find the other one you posted so that we can correct it?

Where did you find the other one you posted so that we can correct it?

In FF, in the Tools/Add-ons screen, click the Clip to DT More button. See the attached images. 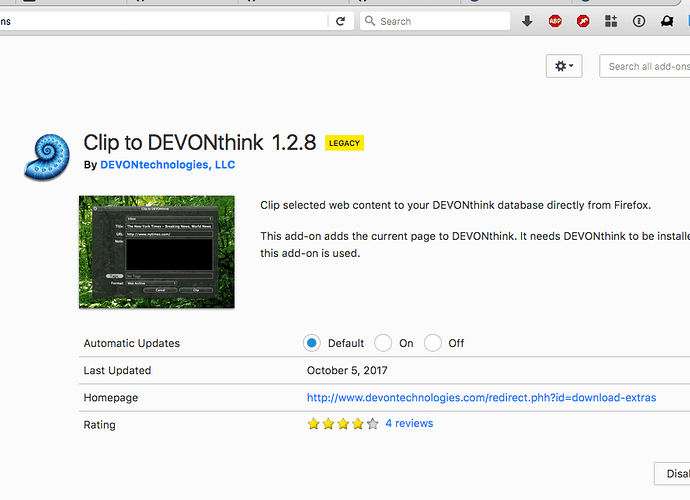 It’s been a week since I asked about this and there has been no response.

FF 57 is fast approaching. The current version of Clip to DevonThink will not work with it.

Can you please let us know what your plan is to deal with this? I understand that it may not be your most pressing priority, and a little “it’s on our todo list and we’ll let you know when it’s ready” note would be nice.

It’s on our todo list and we’ll announce when it’s ready.