At this moment, using Clip to DEVONthink with the web-archive format and clutter-free only produce a file with the title only. It worked fine days before.

You can use this URL for testing purpose (https://www.mikeash.com/pyblog/friday-qa-2015-09-04-lets-build-dispatch_queue.html) .

Due to the ever-changing technologies employed by web designers, not all pages can be successfully clipped.

Note there is no “clipping standard”. These things are developed independently and with their own solutions. Though our extension works in many instances, we have it on our list to enhance in the future. Thanks for your patience and understanding.

I’m curious why you are clipping that page as clutter-free?

I noticed this as well. This is a devastating development for how and why I use DT. I tried a number of different web sites and all returned the same result. This is not a site-by-site problem. I did the latest system update yesterday and wonder if there is a relationship to this problem.

Why would you ask this question? The option is offered and I use in order to capture only the content that matters which also reduces file size.

I have tried capturing as web archive and got the same result. I have wasted the last two hours trying to figure out what has happened.

Why would you ask this question?

Because it’s my job to ask questions and determine not only what’s potentially happening but also to get an insight into what people may be thinking. People often have misunderstandings that lead them to do certain things that may not be the best of choices.

And just because an option is available, that does not mean it’s always an optimal choice.

Many pages has this issue which could be clipped properly in days before. I noticed that the clipping is done via a network request, so it could be some breaking changes in the backend server.

It’s possible though I am unaware of any such changes and will have to check with the admin.

Besides the advantages mentioned by @exbosn, Clutter-free format can also cleanup many inappropriate web UI elements and improve readability.

This function is essential to me. Hope to see it back soon.

I’m experiencing the same issue.
The workaround I found (not very elegant) is: 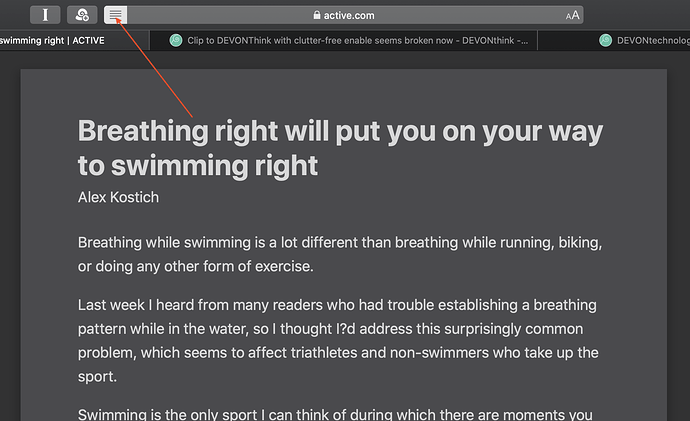 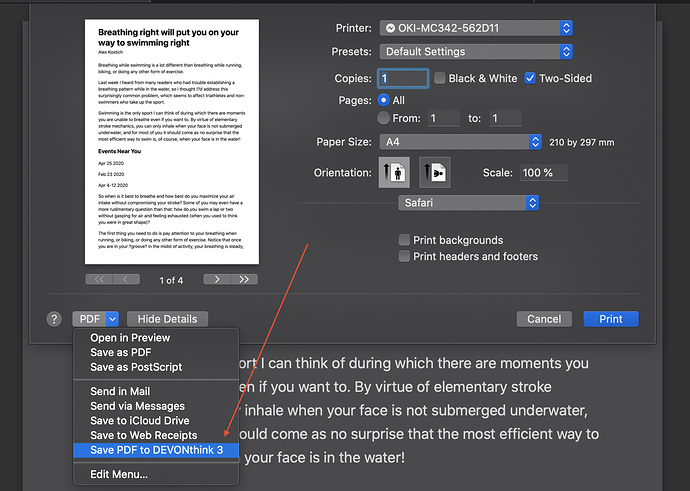 Is not elegant nor fast, But following this steps I can capture clean and lightweight content into my system while I wait for this issue to be fixed.

I have over 6,000 articles stored from over 4 years of use over two versions of DT and numerous revisions to the Mac OS. I want articles as they appeared on their site originally, taken as paginated PDFs without as much of the ads and internal promotion of other site clickbait that has come to infest most sites of the type I need to frequent. This is important when I am taking an article produced in the past but the sidebar is filled with snippets and links to present-day content. I want none of it and the option to de-clutter has usually eliminated it. This the way I chose to use the clipper and have from my first use of it. I want archived articles as PDFs, paginated, as close to possible as there were presented.

The options I chose and why is not the issue, The issue is that suddenly the clipper is broken across all of the options I would choose to use. It is a BIG deal for me.

Note that web sites constantly tinker with the html content. It’s not just ads as images, now they also add images that look like text for ad tracking (check cnet.com for example) . Can’t do much about that if you use direct URL links. Instead save them a PDF files to save the contents as they are.

At this moment, using Clip to DEVONthink with the web-archive format and clutter-free only produce a file with the title only.

FWIW, I don’t think it matters “why” a customer wants to do something – if a feature is provided and used as designed, then it should work. If the feature on offer stops working, and is confirmed, then the feature is either unworkable and should be removed from offer, or it is broken. Simple economics.

if a feature is provided and used as designed, then it should work.

And as with anything in this universe, things occasionally break.

Are there any updates on this issue?

No. As I said, it is under investigation.

I am working around this issue using the print dialog to save as PDF. I then have to go back and capture the URL info from the site and make mental note of the publication date. Then I drop the PFD into my project inbox, open the ‘info’ window and manually change the creation date and add the URL. Now I open the article in a pdf editor or Preview, select and delete any pages I don’t want (usually at the end of the article filled with clickbait), and save. Not at all elegant and very time-consuming.

I only recently got a new Mac. The reason was because my old one had long since maxed out on what OS it could run and the issues that was causing as apps, browsers, etc. would no longer update or be supported. Some web sites ceased to be available. One such issue was the the clipper in DT2 was working sporadically and then finally, not at all. I had to use the procedure I just mentioned to enter content into my databases.The inelegance and time involved was the single most important factor to getting a new Mac.

So I updated my Mac and now spend hours and hours with new learning curves for the new Mac itself, and the new and updated apps, including DT. I probably don’t need/use 75% of what it is allegedly capable of doing. The increased level of complexity is astounding and a lot of the ‘improvements’ aren’t as now I have to drill down through long menus to find what used to be so much simpler (I have many of the same opinions of what Apple has done to Macs in general). Also, I cannot set up DT3 to appear the same as my setup on DT2. Close, but not the same. Not an improvement. Some behaviors are annoying but I am dealing with them.

I needed to get all that off my chest.

The original issue is a very big deal for me, and apparently, other customers. It needs to be addressed ASAP or I will be looking to move to another solution.

I generally clip as a full web achieve, then use the Convert option by right-clicking on the resulting file. I choose either formatted note or rich text.

Formatted note will pull out navigation columns if they are css (I think) allowing to delete top and bottom navigation/ads. Sometimes formatted note still has a javascript overlay that can’t be removed, making it no use, or doesn’t include all photos, or just doesn’t work.

Rich text gets me past javascript, tends to keep photos, but sizes can go crazy depending how they are formatted. But again, I need to manually delete a lot of stuff at the top and bottom, and usually have to resize/space the text.

Very few items ever seems to be one-click correct these days, and as I have a text-to-speech app that does a much better job at extracting article text content, I think this tool must be open for improvements.

Yeah, this is a tough one for me and is the only thing keeping me still tied to Evernote. There’s a lot I love about DT and don’t like about Evernote, but while their clipper isn’t perfect, it’s very good and has the benefit of the preview—DT requires me to constantly switch apps while browsing and clipping, then trial-and-error the format and Clutter Free options until I get something usable. That’s an enormous slowdown in workflow. And while I very much appreciate that this isn’t an easy task and that Devon is a smaller company, etc., this strikes me as the exact sort of an issue that prevents a company from expanding.

Speaking for myself, this function is absolutely, unequivocally a 100% essential one—a database/note-taking program that doesn’t easily clip webpages is just not that convenient or useful. This needs to be at the very top of DT’s priorities.

And I second other suggestions for some sort of preview—honestly, the most frustrating part is the switching between apps.

PS: for demonstration purposes, here are several attempts to clip this exact page—I was totally unable to make it work, and there’s not even a Safari Reader View available. As others have noted, the Clutter-Free option returns only the name of the page. Worst of all, the Plain Text option (even without Clutter-Free selected) returns a completely BLANK page—not even the title! 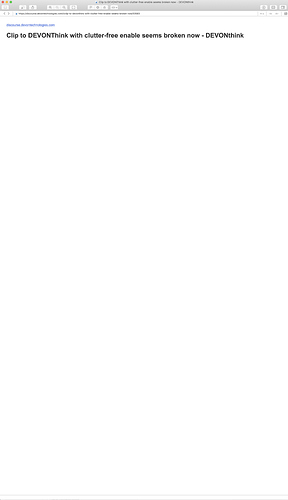 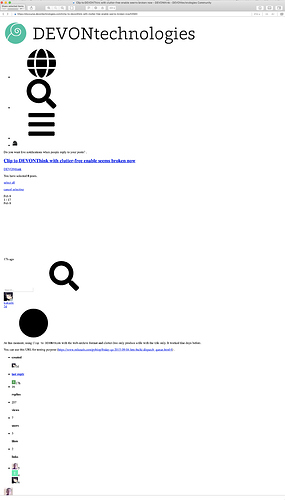 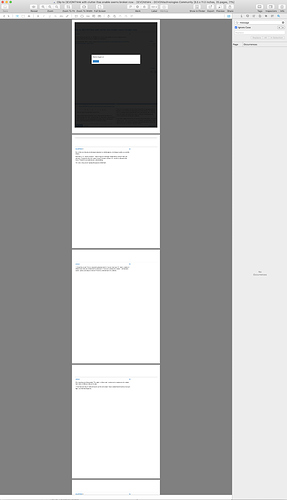 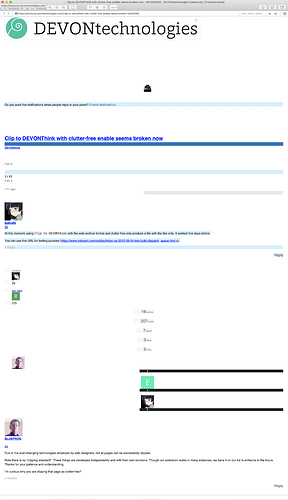 For comparison, my first try with Evernote: 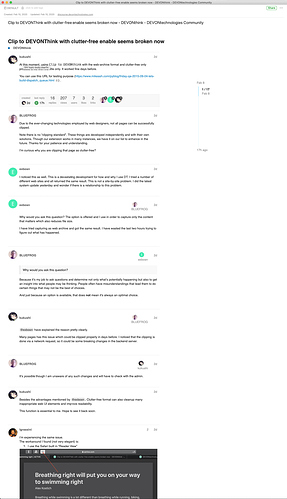 The issue for me is clear—this page is the exact sort of thing I clip for future reference, and I simply cannot do it with Clip to DT.

PS: for demonstration purposes, here are several attempts to clip this exact page—I was totally unable to make it work, and there’s not even a Safari Reader View available.

Safari reader (View > Show Reader) works fine on this page, FWIW. You might have something else going wrong with your content blockers or other features in Safari.

FWIW, for Discourse forums, printing from Safari and saving to DEVONthink as PDF provides a nice alternative. 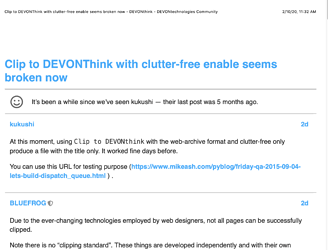 Thanks for the info! I don’t have any content blocker active. I thought when a reader view was available, the “Reader” icon with vertical lines was visible on the left side of the address bar:

But now I know I can choose it from the menu—and I really appreciate your reply.

One thing, though, sort of off-topic: when I select the Reader View per above, I only see a bit of the page: 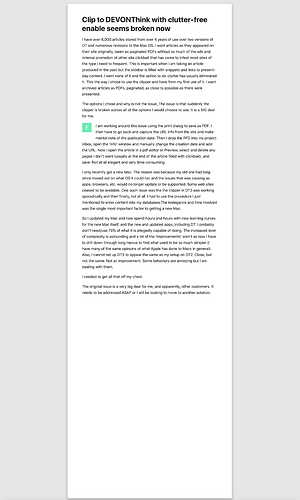 Am I missing something? Usually I can see the whole page.