Clip to DT3 from Firefox

My Firefox AddOn, Clip to DevonThink has stopped working. I use this feature All The Time. When I click on the icon in the Firefox Toolbar, or use Shift-Control-C, all I get in DT3 is the title of the article.

The only way I can now capture an article from, say, Wikipedia is to use the Print script, Save PDF to DEVONthink 3

PS: When I do Print to DevonThink, the page that opens is the dark one, the same as in DT2, not the new Sorter; is that correct?

Browsers can (and sometimes do) inhibit the behavior of extensions. We are working on a change for the next maintenance release that may work around this for Firefox.

PS: When I do Print to DevonThink, the page that opens is the dark one, the same as in DT2, not the new Sorter; is that correct?

Hi Jim: I had DT2 in a folder, Applications/DTPro, but as you suggested, I moved it out of Applications onto an external drive and rebooted. However, the Print:Save to DEVONthink3 dialog still opens a dark pane that looks like the one I’m familiar with from DT2. It’s also extremely slow; about ready to give up when it finally appears.

Also, both the Clip to DevonThink extension in Firefox, and the Print dialog were working fine until yesterday – while DT2 was still in that folder in Applications. Seems something else has changed.

Please post a screencap of the pane you’re referring to. 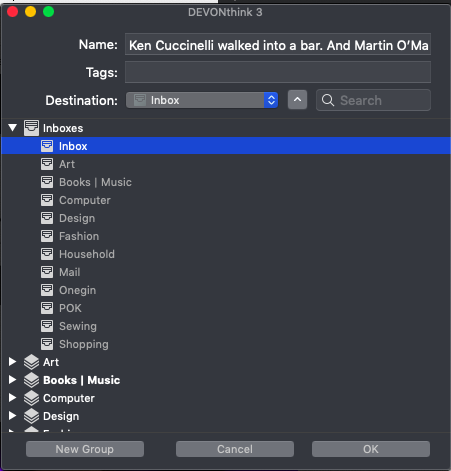 When I use Print:Clip to DT, it brings in the pdf but doesn’t include any of the pictures in the article; it does include a whole paragraph of code at the bottom

And, by the way, when I do import something, either by this means or by dragging, there’s almost never a Thumbnail; I appreciate the Create Thumbnail command in Data, but didn’t have to do that before.

That is the group selector in DEVONthink 3, nothing unusual.

You can use this or import to the Global Inbox via Preferences > Import > Destination.

Depending on the way the site is delivering content, the images may or may not be included. Sometimes if you scroll all the way to the bottom of an article, the images may load and all be present on the PDF. But again, that’s a process beyond our control.