Context menus are too crowded

I’m a heavy user of context menus. The entire point of context menus is quick access to the most relevant commands for any given item. Hotkeys are probably faster, but I can never remember more than a few.

I accept the fact that DEVONthink has a multitude of uses and use cases, and that there are features I’ll probably never use that other people find indispensable. But if all possible features and functions for a particular item are added to context menus, it defies the entire purpose. They became less useful for everyone.

I find that the context menus in DEVONthink are way too crowded. I would like to strip them down to the features I actually use to keep them usable and relevant. Is that possible, please?

I find that the context menus in DEVONthink are way too crowded. I would like to strip them down to the features I actually use to keep them usable and relevant. Is that possible, please?

Do you mean you want a preference to choose which items appear in which context menus? Something like the options in Office apps on Windows to configure the ribbon?

There are a lot of different context menu configurations already. Such a preference panel could get confusing maybe?

Yes, but it doesn’t have to be very complex. The image shows how Cocatech does it in Pathfinder.

The last item in the context menu is “Customize Menu…”, which opens the menu editor. The left pane is the available commands, and the right pane is the selected ones. Drag and drop configuration. 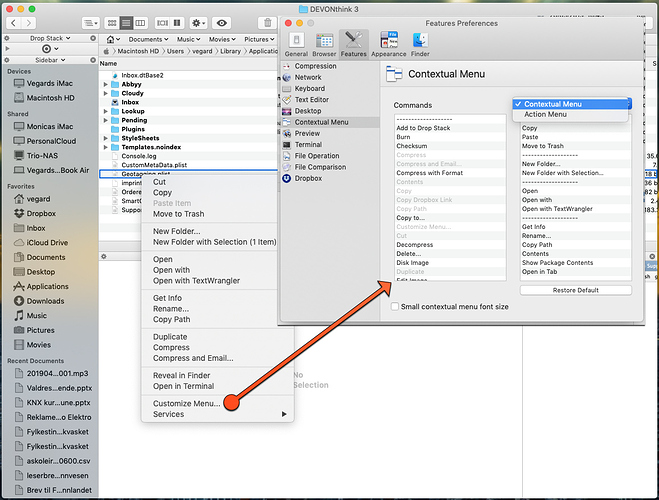 Sure, the question was, there are numerous contextual menus in DEVONthink. Do you want to be able to configure all of them? The one you want to configure might not be the one Davy Jones wants to configure – so where does the line get drawn?

Well, I don’t know how many contextual menus there are throughout the application, but I would be happy if I could edit the menuitems offered for any given group or document.

As you see in the Pathfinder-example, I’m allowed to edit two menus, the contextual menu for any file/folder, and the Action Menu (cogwheel dropdown in the toolbar).

Just a suggestion: If there are a only a few menu items that you need to access frequently, and (1) those menu items allow short-cut assignment, then you can (2) write a simple script and attach it to icon bar as a button for quick access. In fact, you can attach different buttons for different types of window.
For example, I like to trash regularly but I can never remember the short-cut, so I write a script like this:
(code 51 is backspace key)

Or this for copy the item link

The request is noted. However, you are talking about a major addition, including development of a new preference pane and under-the-hood changes. If Development decided to pursue this, it would almost certainly not be in the 3.0 release, but further down the line.