Could you please send the OPML export to cgrunenberg - at - devon-technologies.com so that I could check this over here? Thanks in advance!

The problem is not with the OPML import into DEVONThink. NNW is not placing all the feeds in the exported OPML. Hence my question about converting the bookmarks which can easily be obtained through drag and drop.

Do you have “Export: All” and “Format: OPML (with groups)” selected in the Export Subscriptions… sheet? 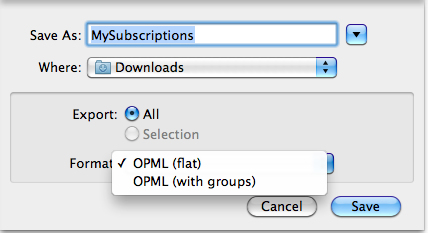 I have solved the problem.

Thanks for the suggestions above. It appears that there is a subtle bug in NNW 3.2.13 (latest version). Whether exporting all (as above) or exporting selections, some of my folders containing feeds in NNW were simply not being exported. By creating new folders and copying the feeds over I was able to coax NNW into correctly exporting the feeds. DEVONThink imports the OPML properly, without fuss.