My thinking is that raindrop.io might be a better interface for this kind of thing than DT. Plus it gets it off my hard drive.

If it’s just a matter of notching up tallies of articles read, that’s fine, but there may be a better way of doing this.

Amen! I think about this topic often. DEVONthink is amazing but it also can lead you to gather things that are only ephemeral.

You could always set up a smart rule for the junk drawer database and have it cull out anything you haven’t accessed in some period of time.

Rich Text field for internal office QA/commenting on a case

Quoted fee for the case

Paid or not paid for the case

Overall I essentially use it as a project management system for the consulting part of my practice. But the document handling and search capabilities of DT3 are infinitely superior to actual project management software, so it works well. Plus part of my work involves identifying applicable academic research applicable for a case - and thus I can create links in a case to relevant articles.

Very interesting ideas there. I haven’t looked into custom metadata at all, although it sometimes occurs to me it might be useful. For example, when clipping articles from the web, often the publication date isn’t included in the clipping.

Recently I remember reading a comment, here or elsewhere, from someone who says they use groups and replicas like tags, and I said to myself, “Yeah.” In my use case above, another person might tag that document “invoice” and then add another tag “unpaid” (later changing “unpaid” to “paid.”) To me, it seems to make more sense to use groups and replicas. As Bluefrog has noted, DevonThink is flexible and fluid – easy to start with one organization system and switch to another. 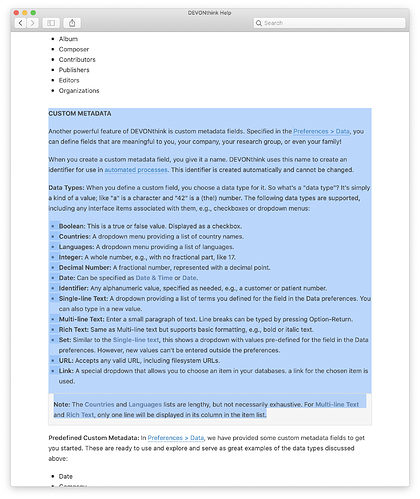 Whoops. Someone drew my attention to this thread and I realized I forgot to share the KM macro. Here it is:

Things turned around greatly during the beginning of 2020 when I discovered Readwise.io : It’s a service that stores your highlights from read-later apps like Pocket or Instapaper as well as Kindle Books and even podcast apps like Airr.

You can sync your highlights with apps like Evernote, Notion, Roam or even export them as Markdown files. I stick with markdown.

What I do now is that I export my highlights every week and then index them into a folder that syncs both to a DT database and my Obsidian vault. Metadata like links to the original articles, name of the book and the like are maintained.

This means that I can access this data via either DT, DT to go or Obsidian.

I am sure there are scripts to automate the last step to export the Markdown files from Readwise into the Folder I use for DT / Obsidian. I haven’t done any deep research into that yet. Hope that helps you

I’m researching about this as well (just got to introduced to Readwise today). I was wondering how do you avoid duplicates of highlights exported from Readwise to DTP? It seems that the Readwise export feature only exports the totality of the highlights.

These are very astute observations - ones we’d all be wise to stop and consider. Gathering has limited benefits if the data is never accessed and used.