ScanSnap scans a file and sends it to DevonTHINK.

I’m pretty sure the issue must be with DT, since Scansnap’s version of the file has already been OCRed and has correct metadata (when checked with Preview) before it’s sent to DT.

I have screengrabs of the metadata—one from file ScanSnap produced, and the other from the same file after it’s been sent to DT. 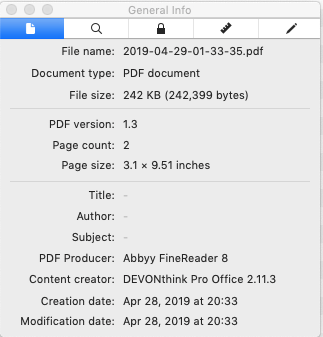 Yes, I like having that, since it reduces the resolution to 200 dpi.

This way I have the original ScanSnap scans saved at higher resolution in a single, totally disorganized folder, in case I ever lose or modify the document in DT and need the original. The lower-res version gets imported into DT where I organize and use it.

As you can see from the metadata above, the file size has been almost halved—and it’s “Producer” has been changed to the Abbyy FineReader software that’s part of DT. Someone else seemed to have a similar, but slightly different, issue:

OCR should no alter the creation date Scripting

I so appreciate your help and sorry for the belated response!