CSS for Markdown, the beginning

This is the second part of some posts on using CSS in and with DT/DTTG. Though I wrote it as a single piece, I broke it up in smaller installments to keep the posts (barely) managable. Please let me know (preferably by a PM) if you find errors of any kind or are missing details. I’ll correct the first ones and try to help with the second ones.

A style sheet is a sequence of definitions of the form

All that selector and attribute stuff might sound overly complicated, so let’s consider a simple example:

With these definitions, you will not notice any difference in the appearance of your document: 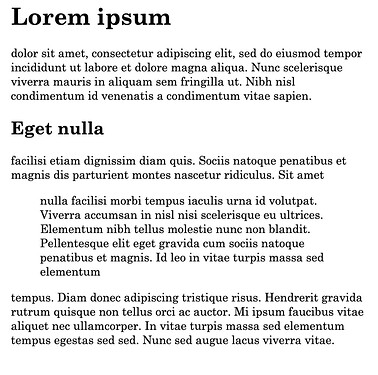 So what would you do if you wanted to make quotes appear indented and with a different background color? You’d have to define these attributes for the element blockquote:

The background-color should be obvious. left-margin defines the distance of the left edge of the element from the left edge of its parent element. So here, this distance is 2em, which means “two em spaces”. An em space is a typographical unit that is as wide as the font’s height.

In many CSS examples, you’ll still find units like px, for example something like margin-left: 10px. While it might be tempting to use these absolute units, you should in most cases not do that. Instead, employ relative units like em or % or ch (number of characters) or vw (percentage of the viewport width). These allow for a “responsive” layout, i.e. one that works well with different screen sizes and orientations. Pixel sizes vary widely from one device to the next and do not work well if the user zooms in or out.

Note that % values always refer to the enclosing element’s (i.e. the parent’s) dimensions. In the case of font-size, a percentage value also refers to the font size of the parent element.

You might have wondered where the blockquote element came from in the second example above. There is a fairly simple relationship between Markdown markers and HTML elements as shown in the following table (click on the

Debugging CSS and playing with It

While it is possible to change an external CSS, switch the view in DEVONthink and then go back editing the CSS until the results please you, that is a bit tedious. A simpler approach is this:

That will open the developer tools of your browser (you might have to enable developer mode in Safari first, though). There, you’ll find a “style” tab in which you can easily modify the styles for all elements individually or change the definitions in your CSS and see the changes immediately in HTML.