I tried that just now, the results were a bit peculiar.

The result of this was that machine 1 showed the full defaults, and briefly machine 2 did as well. It quickly went back to the empty list, though.

That situation seemed stable, until I did something on machine 2 that required a sync (I categorised a document from the global inbox to another database) after which machine 1 went back to the empty list as well.

I spent some more time fiddling around with this and managed to find something that works for me.

My theory here was that the introduction of the non-default custom metadata would help things sync properly. That turned out not to be correct: after things stabilised I ended up with just the “Test” item on both machines.

That fixed the issue for me: I have identical lists on the two machines (except for enabled/disabled state, which appears intentional) and I can create and delete my own entries on either machine and the modified default items are never deleted.

I guess the underlying issue comes down to distinguishing a default metadata item which is missing, and one which has been affirmatively deleted. Some sort of tombstone for deleted items might be worth looking into.

One issue is caused by the default definitions as they’re not handled like custom definitions, the other one is that the CustomMetadata.plist file was deleted but definitions should only be removed via the user-interface. However, we’ll try to improve this in upcoming releases.

I’ve been running into this problem as well for the last month or so when I first started playing around with custom metadata. I just want to clarify that you added the line circled in red to the other, default metadata definitions? 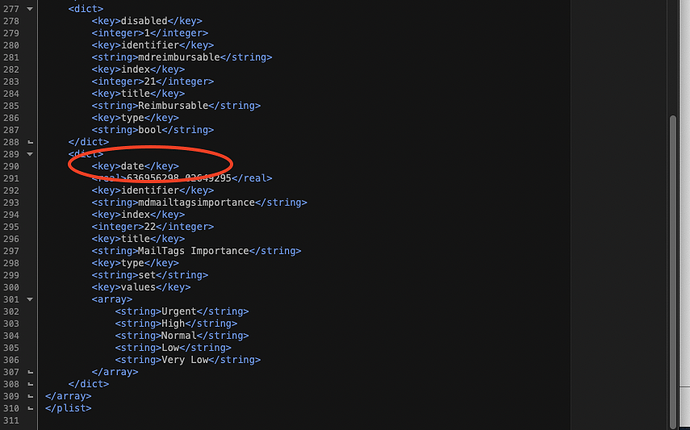 When I do that, starting DT on Machine 1 again, clears all the custom metadata definitions out…

When I do that,

When you do what specifically?

When I add the <key>date</key> to the other entries in CustomMetaData.plist as iay did above )if I’m understanding their instructions correctly).

For all of the reasons in the thread above.

The first time I went to set up custom metadata, the defaults weren’t there. On another thread a month or so ago, the solution was to delete the .plist and DT would recreate them. It did. But as soon as I sync, they all disappear. The only ones that stay are ones I create–any default, even if active and attached to records, disappears as soon as I sync. Searched more, found this thread, so tried the solution posted by iay last August, but still losing them all as soon as I sync…

The only ones that stay are ones I create–any default, even if active and attached to records, disappears as soon as I sync. Searched more, found this thread, so tried the solution posted by iay last August, but still losing them all as soon as I sync…

Just quoting and responding to say I have just experienced this after purchase today and direct sync today. Same result.

As soon as you direct sync with… what?

Direct sync is bonjour according to the help files that DT comes with. It’s DT’s terminology. Two Macs and an iPad though the iPad had not entered the fray before I lost all of those metadata examples. The problem is exactly as described above.

No worries though, it’s easy enough to create my own.

Thanks for the effort to delve but I’m not really looking for a solution here. It’s not a problem because I can add my own custom meta data. I will list the exact steps I took since they are easily remembered and it was a clean install just yesterday.

NB: I started this synching process before the indexing of the PDFs on Mac A was finished. I stopped the sync and waited for the indexing to finish and then continued. In fact, if memory serves me correctly, no sync would happen until the indexing was finished on Mac A anyway.

Once I got my synching working the way I expected it to I set out to explore in more detail the new (and old, it had been a while since I had used DT) features in DevonThink. It was then that I thought that I’d like to store some additional information about these PDFs and went to look at the DT>Preferences>Data screen again and found that the Custom Metadata list was empty (no more grey sample items).

It was at this point I googled the issue and found this thread a posted.

Hope this information helps you

Again, I don’t need a solution because I don’t need sample metadata to build my own. I just hope my own custom metadata doesn’t mysteriously disappear at some point. Given that I’m in sync with all my installs I’m not too worried.

Thanks for the thorough post and understanding attitude. Both are appreciated