Database repeating name but not files

When I opened a database it said there were errors and I did verify/repair. Could not be repaired. I reindexed the database.

Do you remember which errors? In addition, how exactly did you “reindex” the database? According to the screenshot there seem to be lots of duplicate indexed items referring the same files/folders most likely.

Thanks for the quick response.
I did Verify & repair and then Update Indexed Items and then Verify & Repair again
This didn’t seem to do much
I think most of the errors were empty files. Lots with 0 bytes.
I then used the Index Files and Folders command. I think I did this twice (about a day in between and I had forgotten what I had done. So I did it again.) I think it was at this stage that I noticed the duplicate databases.
There ARE lots of duplicate indexed items. Usually 3 items per real (same) file.
My worries are

Do you mean groups or really databases? The easiest workaround now that the files & folders have been indexed multiple times into the same database is probably to create a new database (see File > New Database…) and to index the items once into this database.

Why does the number of issues basically double,
and

Actually I’m not aware of any reports of doubling issues. Screenshots of the alerts and the log would be useful.

Found 212 inconsistencies, 0 invalid filenames, 215 missing and 0 orphaned files.
And then immediately (i.e. the next thing I do) tell it to repair and get a message like
Repairing failed (427 issues left)

As @cgrunenberg requested: what is in Window > Log?
I’m guessing you have zero-byte (empty) files as well as missing files.

As I say, ‘basically’ double, not absolutely numerically accurate but if I have done nothing between commands, and the number of issues goes up at all, it seems odd to me. To more or less doubles suggests some kind of duplication of issues. I have no idea what that means.

You are right. Lots of empty files and a fair number of missing files.

Am moving on to recreating database. I seem to have to do this about every 6 months.

As I say, ‘basically’ double

No; the number of issues does not change at all. V&R reports 212+215 issues, so a total of 427 issues. Repair reports 427 remaining issues, i.e. the same number. Inconsistencies =! missing files; these are two separate entities.

Empty files are not necessarily a problem; DT flags them, because they may be suggestive of a problem - it’s basically up to you as a user to decide where those files are originating. DT does, however, already ignore certain empty files, so the fact that they are being flagged is suspicious, at least.

Where are you indexing from? Is that an external drive? If so, how is it connected?

I use a WD My Passport external SSD attached by USB3.
The data are externally indexed. I do this because I may want to access the files elsewhere (e.g. in Bookends or FoxTrot).
I don’t understand why I have files with no data. They match names of files that DO contain data (i.e. empty duplicates). Is there some process whereby I do something that somehow creates a new empty file from a full file?
It may not be a problem but it is offputting.
Thanks for all your help.
Don

Am example of an empty file along with its duplicate could be useful to see.

Interesting. I did a verify and repair in an old database. Repair failed
I sorted the DT file for those with 0 bytes. Found 215 files. Picked one “rumba under fire”. Using program FindAnyFile, I Searched for all files with that name. (Name contains rumba.png) Found 2. One of size 2.7M, One with size 172. Then asked to reveal in finder. (Finder with rumba.png). You see that one is named “rumba under fire #24310.pdf”, the other is just named “rumba under fire.pdf”. But BOTH have the same file size but the one with an empty icon cannot be opened. ["Rumba (good).png vs Rumba (bad).png] I cannot open the empty file with anything. If I use Skim to try and open it I get the message seen in file (icloud sync file). "Skim cannot open files in the “icloud synchronization file” format.
I looked at several other ‘duplicate’ files like this. One has the “name #nnnn.pdf”, the other (the empty one does not have the #nnnn. bit.
AT one time I used a Keyboard Maestro macro that would addl sequential numbers to the end of a file name. I did this as an easy way to reference them when writing. Did not work well so I stopped doing so. It could be that somehow these numbers are causing grief.
Don. 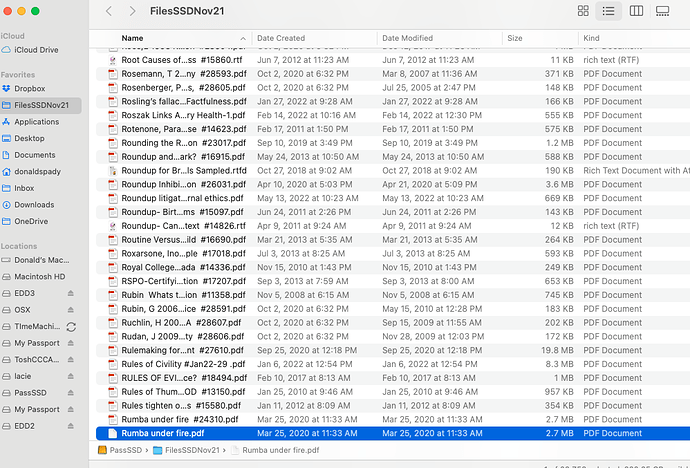 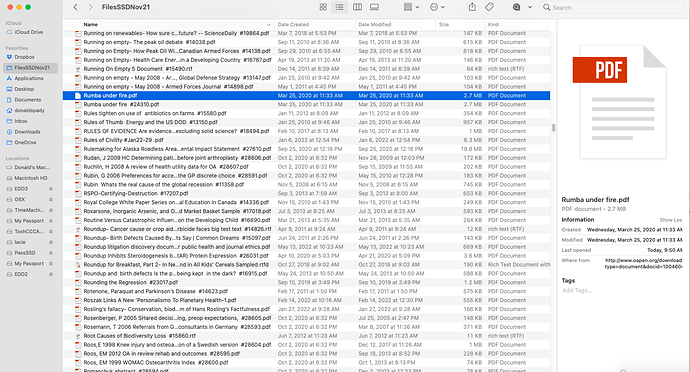 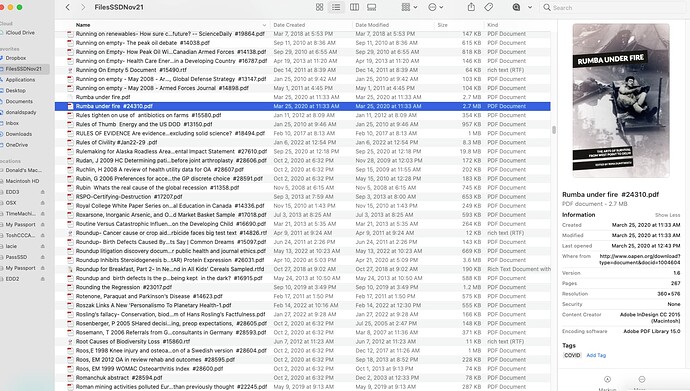 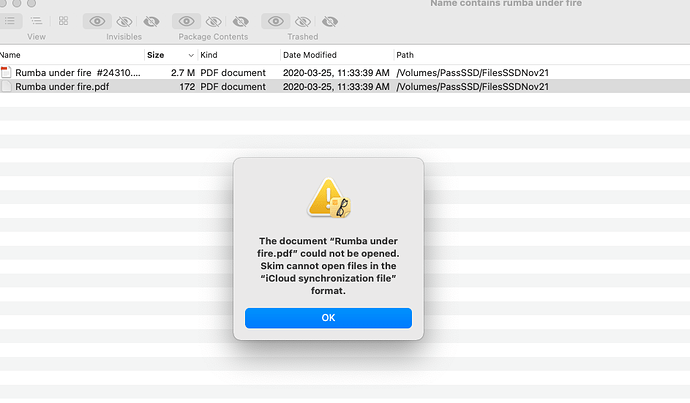