I regularly use ClipToDevonthink to send webpages to four databases. However, one database is missing the small triangle at the bottom of the list of recently accessed groups. The other three databases allow me to access all the groups via the little triangle icon.

I’ve looked for a setting I may have missed but I haven’t been able to find anything to fix the problem. If I want to add something to the database I must use its inbox which isn’t nearly as convenient as placing it in the appropriate group.

Strange… I received an email regarding a reply to this topic and yet there doesn’t appear to be a reply. This is the second time this has happened recently; the other time was for a different topic.

I did receive an email from tech support after I submitted a ticket for this problem. I replied to the email on 11/20/13 and I have yet to receive a reply…

Did you reply to the email or the ticket? (The Ticket is the best option).

I replied to the email because the writer asked me to “send” him a screen capture of the HUD window. I interpreted that to mean that I should send it via email.

When I check the support webpage I don’t find a way to respond to the ticket.

A response to a ticket on this topic was made on 20 November, with a request for a screenshot. No response to the request has been received.

Note that recent groups are not hierarchical, do not include a black triangle. But the destination of a clipping can still be selected among all groups in all open databases.

Bill, I resent the screen capture via the ticket link. It will do a better job of showing what I mean; your response above doesn’t clarify things for me. I’m having trouble deciphering the jargon…

Here is the screen capture. Note that three databases have the tiny triangle that lets me access the other groups in the database; one database does not… 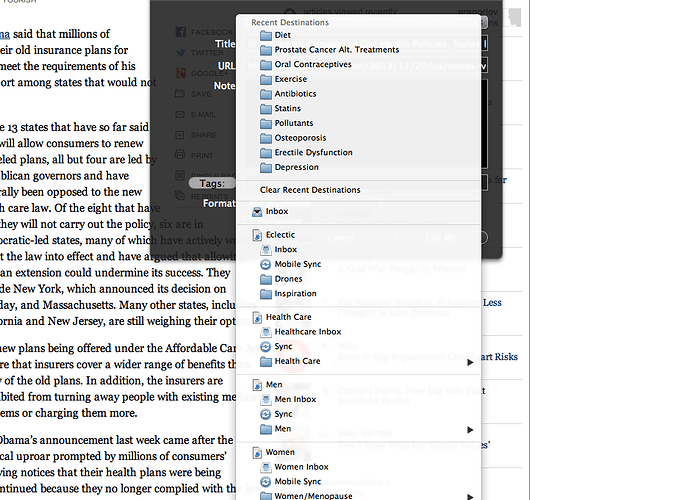 By design, disclosure triangles (the black thing) will never appear in this list of recent destinations: They would only appear in this list If one or more of those top-level groups in the Eclectic database have subgroups. Do any of those groups have sub-groups?