Okay, I finally realized one of the things that bugs me about DT and that prevents me from using it more, and this will probably sound silly to many, but do keep in mind that I put myself through grad school doing graphic design work and so there are some things my eye sees that I can’t make it “unsee”.

In this case, it’s the default letter-spacing in DevonThink. It’s wonky. I’m attaching a screenshot that has the same text as displayed by DT and by the application that I use in conjunction with DT, Scrivener. Both, I assume, use the RTF text boxes that come with OS X – I’m sure there’s some NS-prefaced string I could throw in here to make me look like I know, maybe, what the heck I’m talking about, but I won’t pretend. 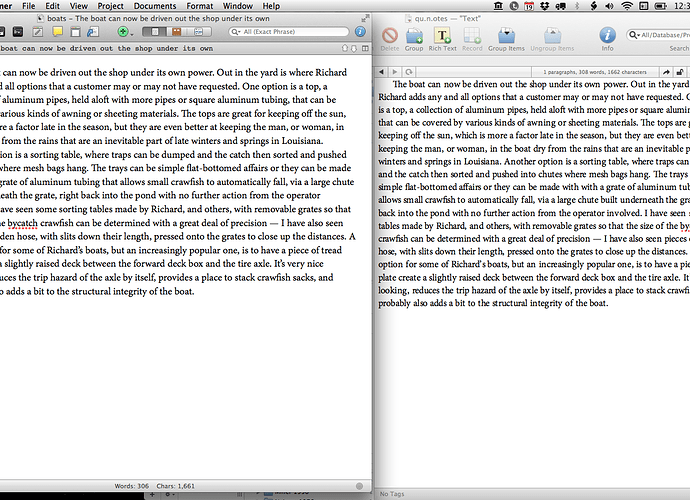 My assumption is that both developers are fairly small shops and that neither will re-invent the wheel. And yet, to my eye, the Scrivener text display is heads and shoulders above the DevonThink display, which seemingly randomly either crowds letters together or spaces them too far apart.

Is anyone else seeing this? Is there a setting I can tweak to make it all better? Is this a bug and should I file it somehow with the developers?

I can’t help on the aesthetics issue.

But you may appreciate – as I’m a native of Louisiana now living in the Midwest – how much I enjoyed boiled crawfish on Memorial Day weekend. Cajun Grocers had a special on crawfish, and I ordered some that were shipped from Lafayette via 2-day air. I hadn’t had boiled crawfish since 2007.

I remember when you moved … and I remain jealous! Better to fly in crawfish than to have to fly in ethics and vision!

Is anyone else seeing this? Is there a setting I can tweak to make it all better? Is this a bug and should I file it somehow with the developers?

Did you zoom the text? That might cause such glitches but the next release will improve this.

No zoom was applied. Or, rather, this is the default view with my default text, Adobe Minion Pro. Changing type faces doesn’t change the problem: I see it with other type faces, but, to be honest, I haven’t checked every single face to see if there is one in which the problem does not occur.

To be sure, I am very glad to know that this is scheduled to get improved (or fixed). I had set DevonThink aside for a while, but I have recently established a pretty nice set-up that is proving very productive.

(If anyone cares, it’s DevonThink + Papers + Scrivener. I imagine if it’s probably a fairly popular combination.)

To be sure, I am very glad to know that this is scheduled to get improved (or fixed).

Just send me an email and I’ll send you the latest beta (to ensure that it’s definitely fixed).

Okay, I am working with the beta version of 2.6, and it’s all fixed.