If so, will there be a Pro version, and is there an ETA?

I assume all the features in DevonThink 3 will appear in the Pro version; is it worth giving the former a test run while I wait?

I do like the suggestion of trying it in a separate Identity with a dup of an existing database to wall off any problems.

No. There is only one edition for the trial of the beta: Server.
If you purchase an edition, you will have the functions of the edition you purchased.

Hi Bluefrog. Sorry, maybe I’m being a little thick this evening, but remain confused by the nomenclature.

The beta is called “DevonThink 3”. The product page lists the respective features of “DevonThink Pro” and “DevonThink Server”, and on that page it refers to them as the “two higher editions beyond the feature set of the standard edition”. That suggests the three “editions” that I’m familiar with as a long time user, Standard, Pro, and Server.

So, trying to be clear here, I’m asking for confirmation that the DevonThink 3 Beta now on offer is an updated version of the “standard edition”, which is what the name suggests, and that we are still waiting for updated/beta editions of DevonThink Pro and DevonThink Server.

If that is the case, is there an ETA on the Pro beta?

And as a long time DT Pro user, is there reason to recommend I try the new standard edition beta – like to get an idea of what might be coming with the Pro version?

AIUI there is only one version — the various levels of features will be turned on and off in accordance with the version you eventually buy.

However, during the beta you have access to all the editions, from Basic to Server, so you can try out all the features —you can see the ones which are only available in higher levels because they have a star in the menu. So download the Beta now and you’ll be seeing every single feature that will be available in the main release, even the Server.

For example: here the OCR menu is only for the Pro version and above. If you only buy the Standard version, you won’t have access to this, but during the beta they all work. 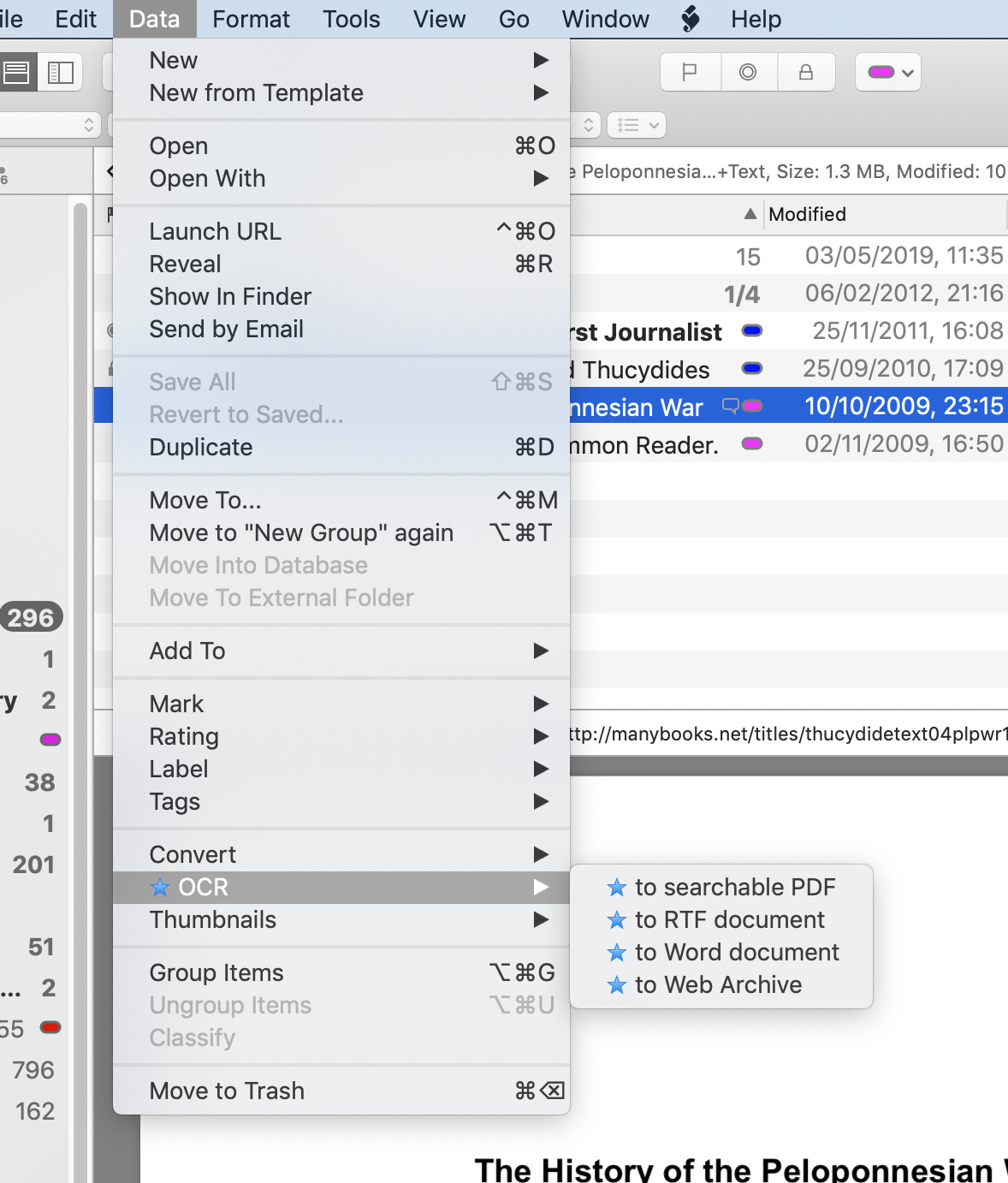 I don’t know whether in the release version the items will be hidden, or greyed out, or whether there will be 3 separate downloads: for the time being, just download the beta and you’ll be fine.

Thank you for a very clear, comprehensive reply. Despite going over all the information on your website carefully, several times, I had no idea it worked that way. I just looked again, and nothing. Unless I missed what was right in front of me, may I suggest you put what you wrote here up on the DT website page – perhaps with the upgrade instructions?

I think I will download the Beta and play with it, and will provide feedback if I notice anything worth letting you know about. JHH

For completeness (though I agree it’s not easy to find from the main page):

You’re welcome – but it’s not my website… I’m only a user.

Ha! Occurred to me as I hit send (the AIUI should have clued me),.

In any case perhaps one of the DT people is keeping up with this topic and 1. confirms you are correct, and 2. if so, puts the info on their website. Thanks for your help, J