DevonThink resets while in use?

I just had a strange “DevonThink reset”. While DevonThink was in use, new Windows suddently displayed the “15 days to activate” green button in the top right, as if I had no pro license. Also the templates Menu was completely empty. Then I quit DevonThink and reopen. Now I was in front of an unlicensed DT-3.6.1 with favorites completely empty. I entered license data again (had to go to the website and deactivate/remove the device I’m using first) and now some settings are reset. All templates are completely “vanilla”. An imprinter that I had configured is also gone. My databases all opened as before and up top date. Sync is also set up as before.

How could this have happened and how do I make sure it does not happen again?
I have backups of my templates, but is there a way to recover my imprinter?

This sounds very similar to what I experienced with another app, it was caused by some bug in macOS

A quick search for “license” here in the forum would have answered your question* - here you go. Well, the first part at least. Have you got a backup of /user/library/?

The imprinter data is here: /Users/yourusername/Library/Application Support/DEVONthink 3/imprinter.data - if you copy that file back from a backup whilst DT is closed, you should have your imprinter data back, I think.

Assuming I am right in saying the cause of the problem is described in the link posted above, you should be safe once you have restored things.

Thanks, I had seen that thread some time ago and I re-entered license data. But why are some settings gone/corrupted (and other not!). That worries me. Yes I do have backups, but just copying around “.data” files without knowing their structure… well it does not cure my worries.

You are describing behavior that would be related to the Finder or operating system.

I admit, that I’m going for a different guess. The functions/implantations which have been lost are functions which are not available in the standard version but only in the pro version - or is that not true? They were therefore lost when the license was degraded.

I have copied the data I quoted from one machine to the other without any problem. As such I would not expect you to need to worry about putting back the quoted datafile.

Thanks for that feedback. @tomka please accept my apologies, seems the tree and bark are not compatible with one another

My smart rules and smart groups were also gone. It seems like everything except Preferences and Databases was gone. As was mentioned before, it seems my ~/Library/Application\ Support/Devonthink\ 3 was in the factory state. I have no idea why. I’m on macOS 11.1, but this update was some time ago. Why would this happen now? It makes no sense.

So I replayed the version from Time Machine a week ago and replaced Inbox and Inbox.dtbase2 by their current versions.

Then I restarted DevonThink and entered my license data again. It seems like everything is in order now, but I still feel uneasy about the whole process… It’s just a bad situation if half your life is organized in DevonThink and then something unexpected/unexplainable happens

Well, as the databases other than Inbox were not affected, I hope I lost nothing.

I have not read any such occurrence described on this forum previously. It’s certainly worth broadening your examination of what might have caused this. Can you be reasonably sure that only DT was affected? Do you use 3rd party security software (designed to detect “suspicious activity” and quarantine files, for example)? Has anything else on your system changed or been changed? Presumably your home directory is on the internal hard drive?

All the symptoms point at something affecting the Application Support directory, at least DEVONthink’s specifically.

Yes, I went through my time machine backups to look at the versions of the application support directory.

There is no other problem with this computer and no indication for data loss in other locations. I also don’t use any virus scanners, mac cleaners or other snake oil.

It seems that if there is no license detected, then DT3 does some deletion or house keeping, though. For example, if one copies the Application Support dir over from a backup and then starts DT3 in the trial stage, the downloaded copy of ABBYY is immediately purged and needs to be redownloaded once the license data is entered. To me this whole thing seems like some bug in DT, maybe it did delete the whole Application Support directory ? The whole thing coincided perfectly with the app going back to unlicensed / trial state.

The whole thing coincided perfectly with the app going back to unlicensed / trial state.

Post hoc ergo propter hoc? As always, Jim may correct me, but presumably there is a license file somewhere, which might have suffered the same fate as the other files in the application support folder. If (!) that’s true then the return to the unlicensed state could as easily be a symptom rather than the cause.

In addition to Jim, maybe @cgrunenberg will be able to shed some light after the holidays (along the lines of “DT contains/does not contain any mechanism to delete said files under circumstance a, b or c”). Certainly it’d seem pretty important if it is a bug (even if it’s clearly not occurring commonly).

In the meantime maybe check your backup strategy is suited to the importance of your documents (you post suggests to me that you’re doing weekly backups? Is that often enough? Do you cycle the backup mediums? Etc.)

@BLUEFROG, this could be related to the issue I sent some time ago in my M1 Mac, when after restart got some recovered files, ticket #138891.

And I guess this issue is at macOS side than DT side.

(Could be a disk snapshot recovering, like it should happen in Microsoft Windows user profile: suddenly something go wrong with your profile registry and Windows restores “old good known configuration” from disk journal/snapshot).

Hmm. I’m skeptical. Why would it then only affect DT’s directory? Also why would it restore to a state that did not exist in a very long time?

According to Reichenbach’s principle, if A and B are correlated, then either A causes B, or B causes A, or there is a common cause.

along the lines of “DT contains/does not contain any mechanism to delete said files under circumstance a, b or c”

DEVONthink does not clean up its application support folder automatically, files (e.g. saved smart groups/rules) are only updated when necessary and subfolders are only added, never deleted.

The reset of the user directory happened again today.
So I just fire up DevonThink (after rebooting because of the MacOS 11.3 update!!) and most of DevonThink is vanilla.

Is there any way to debug this? It is super-annoying to restore everything from backups again.

It looks like some files in ~/Library have been restored to default by DevonThink. Are there any circumstances (file corruption?) under which this could happen?

Here’s some info on the modification dates of the folder “~/Library/Application\ Support/DevonThink\ 3”: 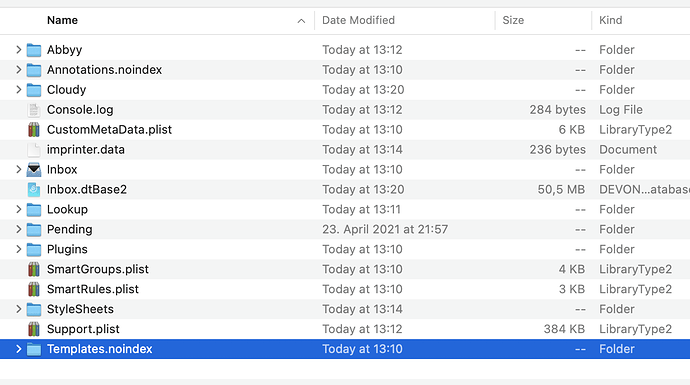 FYI, I upgraded to OSX 11.3 today on two machines with no impairment to DEVONthink. So I suspect the root cause may not be caused by the OS upgrade?

It looks like some files in ~/Library have been restored to default by DevonThink. Are there any circumstances (file corruption?) under which this could happen?

DEVONthink does never reset its preferences. In addition, this wouldn’t affect other things like license, templates, imprinters, favorites or smart groups/rules. All of them are stored in their own files.

Most likely reason is that DEVONthink’s application support folder was deleted/renamed/removed. Did you update macOS and check whether the folder or its contents was among the files relocated by the update?