@smilingtiger, a number of researchers I’ve run into recommended Zotero, so that got me started on the journey. It seems like there are Zotero integrations for just about everything (Word, Scrivener, etc.). The other interesting option I’ve run into is Mendelay. I’m open to suggestions.

Thanks, actually after doing some research i have come down to Zotero and Bookends, I still dont know which one i am going to choose …

For me I don’t even remember if Bookends was an option when I made the decision. My graduate program gave us access to EndNote for “free”–so once I graduated, I needed something new, cheap (Student loans you know…), and cross-platform. At the time, I could run Zotero completely in Firefox on my work computer, and natively on my Mac (I don’t think that Firefox-only version is still available).

I also found ZotPress and phpZoteroWebDAV which allow me to incorporate all my references into my website.

It also plays very nicely with Word and LibreOffice–and at the time nothing but EndNote worked with Pages–haven’t looked again.

Zotero is terrific because it is open-source and has a very active developer community.

But there are limits to how polished an app can be and how quickly new features can be added with an open-source app. Most notably, Zotero has no Applescript support and thus a number of integrations are done instead via Bibtext and Terminal-type tools.

Bookends hits a really nice sweet spot as it is developed by a small (perhaps 1-person) shop clearly dedicated to this mission. While it is not open source, it has extremely nice capabilities to customize its functions. It is impossible to open the extraordinarily detailed Bookends documentation and not learn some new feature which you overlooked for years. On top of that, Bookends has Applescript support so that makes it a lot easier to integrate with other apps.

If you get into detailed analysis of academic literature someday then Tinderbox is the utlimate tool in that regard; for all the above reasons, Tinderbox integrates very well with Bookends but not quite as well with Zotero.

Mendeley, Endnote, and others are largely commercialized and not nearly responsive to customization/integration with other apps as Zotero or Bookends.

Given the above, personally I have long used Zotero and in fact have developed or commissioned a number of integrations between Zotero and other apps (see Zotero - DT3 Import Working: A Customizable digital word processor for HTML, RTF, and PDF ). But particularly given the increasing role I see for Tinderbox in my curation of academic literature, I am largely switching to Bookends.

I experimented briefly with referencing in Nisus Writer Pro – using BookEnds – and found it rather crude. By contrast, referencing in MS Word – using Zotero – has worked quite well for me. 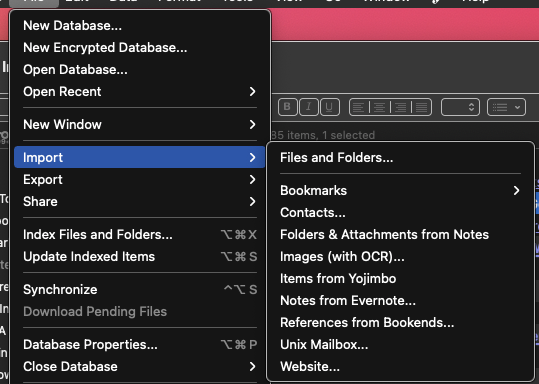