Exportable metadata would be very helpful. I use DT as my primary clipping/storage app for various kinds of online sources as well as archival research. In order to organise and reference the resulting documents, I’ve added custom metadata fields. 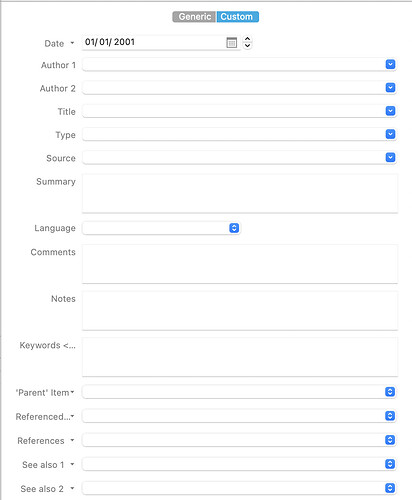 If I want to cite such materials, I currently need to create manually a record in Zotero. So it would be very useful to be able to turn these fields into .ris files [or similar] which could be loaded into Zotero [or similar].

that does sound like magic, but I can’t quite see the process. Do you mean you anotate the indexed file in DT? and not quite sure what you mean by ‘links that DT lets you create’. Sorry if I’m being a numpty, but if you could explain it a bit more that would be so good. thanks

I think you meant to reply to @laudunum’s post aobve.

Now, in DEVONthink, add the folder where your reference manager stores PDFs (~/Zotero/storage) as an indexed folder: 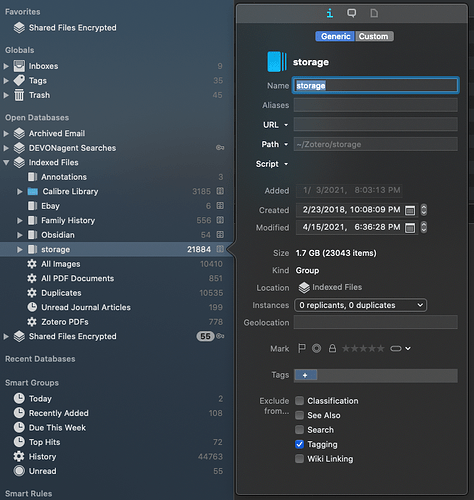 Now, annotate the PDF using the application of your choice (I use either Preview or DT–and sometimes I open them from DT and sometimes from Zotero–it doesn’t matter) and DEVONthink will display those annotations and allow you to jump right to that annotation: 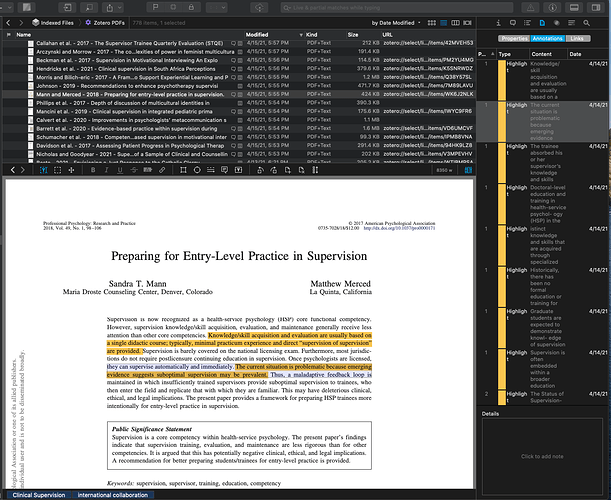 There may be other steps that others use, but hopefully that helps a little.

Continuing the discussion from DEVONthink with Zotero Workflow:

Thanks so much - brilliant. Now I just need to work through all the orphaned pdfs and refs that have arisen since I wrote my diss…
Again, thanks so much. Ngā mihi, Lindsey

Bookends is wonderful in many ways. Sadly legal citations isn’t one of them (eg. US ‘Bluebooking’). For the non-tech-minded user, Zotero is far easier in this respect.

Have you made a feature request to the Bookends people about the potential for improvement in this area?

@BLUEFROG Yes, thanks for the suggestion. I did this and I received a very nice reply. Sadly it said: “Unfortunately we have no Bluebook formats. … they are complex and arbitrary, and there are some things that Bookends simply can’t do…”

I have a large library of highlighted PDFs in Zotero, and would love to be able to have it mirrored in Devonthink so that I could then link through to Tinderbox and Scrivener. I’m happy to keep using Zotero as the base for storing and highlighting the articles, but would like to be able to link them to related notes and other sources I store in Devonthink.

I have read all the forums for the various apps, and haven’t found a way to do this. It might be partly a reflection of my having no programming or technical knowledge, so I don’t understand some of the technical language used in some of the forum discussions and need a simple off-the-shelf solution.

If anyone could possibly point me in the right direction, my research and I would be exceptionally grateful

Have you tried this:

Let me give a huge thanks to @retorquere for creating and sharing an app written in Node which does a terrific job importing Zotero data into Devonthink DT3: I have long sought a way to combine these two applications. Zotero is ideal for collecting and organizing citations. Devonthink is ideal for searching information as well as working with information in order to create a report or presentation to share with others. The combination of these two results essentially in a programmable wor…