First of all, really great job with the new version, really like it.
I’ve a problem with my “Global Inbox” from version 2, which is not showing the existing items in version 3 “Inbox”. All new created items show up correctly.
Any idea?
Moved it out and in again, the same?

The global inbox (~/Library/Application Support/DEVONthink Pro 2/Inbox.dtBase2) isn’t automatically migrated as it might be still used by version 2.x.

You could either move it to ~/Library/Application Support/DEVONthink 3 (assuming that your current global inbox is empty) or export the items from version 2 via File > Export > Files & Folders… and then import them to version 3. Another possibility is to synchronize the global inbox .

Could you kindly clarify the following, regarding the moving of the /Application Support data (Inbox content-files) from DTP2 into DT3 (I have too many files in my current DTPO2 inbox to make an export/import very simple):

In the /DEVONthink Pro 2/Inbox.dtBase2, there are currently the following files/folders as per the screengrab: 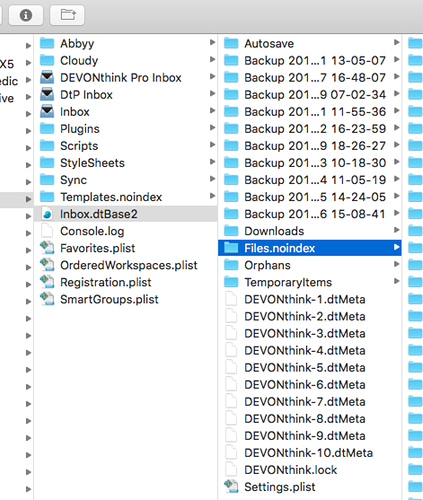 Can I merely leave all of the other files [the .dtMeta & .plist files] (all the other folders are empty in any event), and copy the contents “as is” of the Files.noindex folder into the new /Application Support/DEVONTthink 3/Inbox.dtBase2/Files.noindex location?

This wouldn’t work (and you should never modify contents of *.dtBase2 packages on your own). If your global inboxes in version 2 and 3 aren’t empty, then you could either export/import the items or synchronize the global inbox (just like synchronizing two Macs or a Mac with iOS)

Thanks Christian - just to be clear, my Global Inbox in DTPO2 has many items in them, but DT3’s Global Inbox is currently completely clean – with nothing in its /Files.noindex folder… Which had me wondering I I couldn’t simply try a straight ‘inject’…

If not wise, then export/import it will be.

If the inbox of version 3 is empty, then could also move the Inbox.dtBase2 of version 2 and replace the one of version 3 (of course while both apps aren’t running). However, this is only recommended if you want to migrate to version 3 now.

Ah - so that’s a move/replace of the entire “Inbox.dtBase2” package? Thanks - will give this a go, seems closest to what I want!

Edit: Just to confirm all worked seamlessly! Thanks.