Hi,
I’ve been struggling to overcome the different word counts showing on two versions of the same local sync store database. If you see attached, all details are the same except for this statistic; one reads 40,201,499 and the other 40,182,180. I have assumed (possibly incorrectly) this means my DB is unstable and so have optimised, rebuilt, deleted and imported, copied to new DB and back again etc on each machine without it making any difference. I’m out of ideas now. Please can you advise?
Thanks 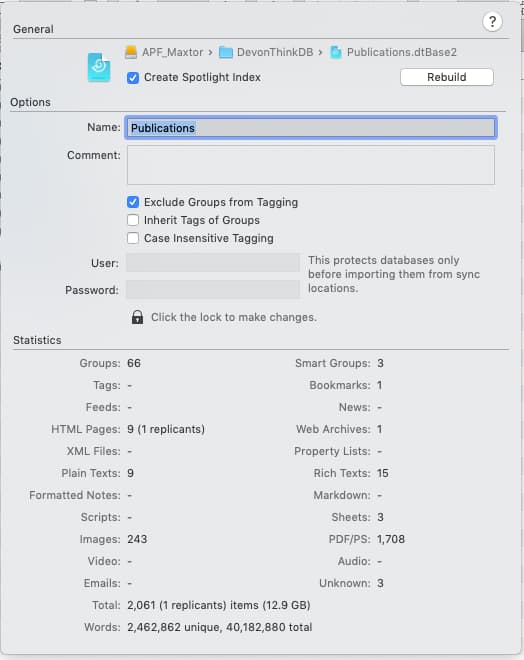 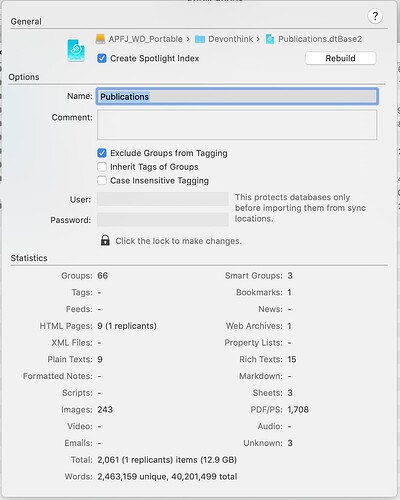 Do you use the same versions of macOS & DEVONthink on both computers? In case of unknown third-party file formats the installed apps and therefore Spotlight plug-ins might make a difference too.

And the same apps are installed on both computers? Are any of the PDF documents quite large?

Yes, same on each. Some of the PDF’s are large but surely that’s the same for each computer? They are both using the same file system. I have eleven other DT DB’s and they are all fine, it’s just this one…

Is this a problem or can I ignore it? If it’s simply spotlight indexing I can turn that off.

Some of the PDF’s are large but surely that’s the same for each computer?

If one of the computers is a lot slower, this might make a difference actually.

Is this a problem or can I ignore it?

It’s not a real issue as long as the other numbers are the same.

Both comps have SSD drives so I don’t think that’s the issue. At least both copies sync in both directions now so I’ll ignore it!

Thanks for your time.

Both comps have SSD drives so I don’t think that’s the issue.