Direct synch with devonthink to go has disappeared in V3?

I must be blind or stupid or missing something. Until recently I could synch between laptop and iphone instances of Devonthink directly, now, with V3, this option has disappeared (or is well hidden?). Over many (less than 10 but close to it) years I’ve accumulated several databases, totalling about 20 gig.

What am I doing wrong (I so hope I am!)? Or do I have to pay a monthly fee to some “cloud” provider now??? If there’s no direct synch anymore, then I might want my money back, at least for the iphone app. Or maybe I’ll stick with v.2 and get Paypal to cancel my today’s purchase for v3 as “significantly different from described”

If I’m to pay a monthly fee purely for the synching purposes, it’d be to Evernote and not to Apple or Dropbox. Call me old school but I’m not into subscription model (or “in-app purchases”

Please tell me I’m mistaken and Devonthink hasn’t become a toy top play with small datasets or a money drain. I stuck with it despite its endless bugs and quirks for too long to quietly abandon my little mobile data collection routine.

It has not disappeared and it’s not hidden.
It’s in the exact same place it was in DEVONthink 2…

Walk me through this. What do I set up on the mobile instance? And on the desktop, 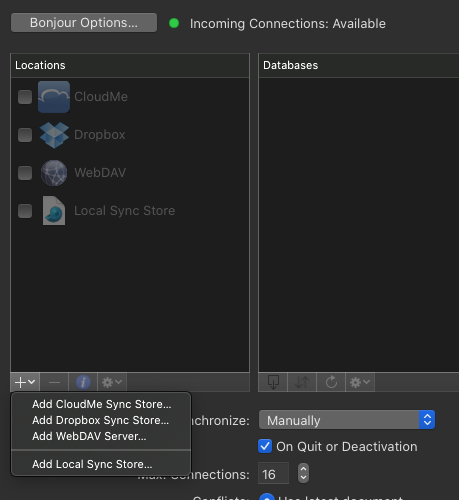 It’s the same a v2. Enable bonjour sync in DT (“Enable incoming connections”). Assuming your network is setup correctly, and both devices are on the same network, you will see your computer listed in the available sync locations in DTTG as a “Local Network” location: 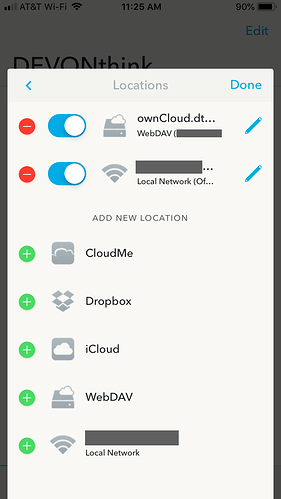 Bonjour can be used to sync between devices, IF :