I’m running DT3.02 on Catalina and have it set to open at login. I’ve found that in each of the DT3 releases, the databases previously in use aren’t always (< 1 occasion per week) automatically opened when the app launches. Although it’s an easy matter to open them from the File menu, can anyone suggest a cause?

Did DEVONthink or the system crash, did you use force quit or was there a power outage? In these cases the databases aren’t properly closed and not automatically reopened (e.g. to prevent endless crashes).

The databases didn’t open this morning, which prompted my question, and there was indeed some sort of ‘system event’ last night which prevented the machine shutting down at the first attempt. I’ve seen the ‘this database is already open’ error messages with DT2 but not since upgrading and not with any of these events.

Many thanks for your diagnosis, I’ll monitor and look into future occurrences more closely.

Are you quitting DEVONthink (and other apps) before shutting the machine down?
Despite the nay-sayers, this is still a good policy.

Sorry to chime in to someone else’s thread but I, too, have experienced the issue of databases not opening on launch of DT3 Pro 3.0.2 (running under macOS 10.15.1 with supplemental update).

I guess it may happen somewhere between every five to ten launches of DT3 so it’s very difficult to diagnose why it happens. I have not set DT3 to open on login although I do almost invariably open it during the course of the day. Before shutting down the computer (which I do every evening) I quit all apps. Force quit has not been used on DT3 (and, indeed, on most other apps most of the time) and shut down is always “proper”.

I’m really sorry not to be more helpful—except, perhaps, in indicating that the OP is not alone.

Do you see databases in the Recent Databases section of the Navigate sidebar when you close a database in DEVONthink?

No—there is no Recent Databases section in my sidebar, hidden or otherwise (I have merely, Favourites, Globals, Open Databases, Smart Groups and Smart Rules). Recent databases do appear under File > Open Recent.

In System Preferences > General > Recent Items, do you have a value other than None set? 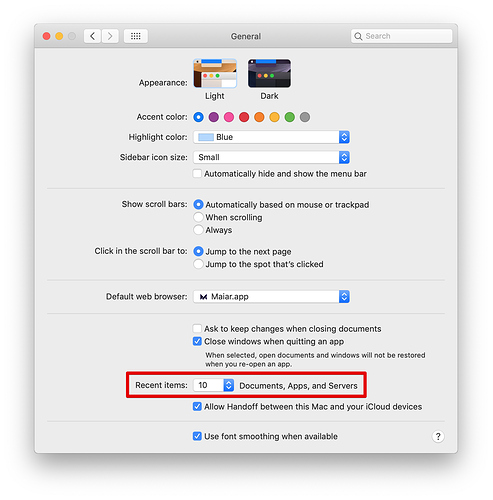 My setting appears exactly as yours shown in your screen shot.

Close a database. Do you see the Recents now?

Yes, indeed, I do—but it is unpoplulated. In other words, it doesn’t show any database, including the one I just closed.

Edit: sorry that is wrong! It was not on “Show” and when I corrected that it did show the closed database. Apologies.

Currently opened databases or databases which are part of the favorites are not shown in the Recents section.

Ah that makes sense—the database I closed was not a favourite (i.e., thus it was shown in recents). Next time I have the problem with databases not opening on launch I’ll try to remember to check whether it’s limited to favourites or anything else…but my recollection is that none opens.

Just in case it’s relevant, one of the databases I always open when launching DT3 is an encrypted database (so I’m always prompted for the password). I do recall that when DT3 launches without any datbase open I do not get the password prompt on launch of DT3 and my best recollection is that no databases are then open in DT3.