I reckon you have use for some bugs I’ve observed.

[1]: PDF Annotations.
[1.1]: The highlighting of text in PDFs that was placed via the native DT3 editor is not detected by DTGO or PSPDFKit’s PDF Viewer app on iOS respectively. Segue-ing to the Annotation Tab in DTGO shows me that it has information that an annotation exists on the respective page. Viewing this page, no highlighting get’s displayed. Annotations placed with PDF Expert do show up.
[1.2]: When annotating a PDF via the native DT3 editor, e.g. after highlighting a sentence, the app more often than not freezes for quite some time, i.e. the beach ball keeps spinning. I conducted an ad hoc test, timing the hiccup: DT3 freezes for a whopping 5:19,11 (5 minutes, 19 seconds). This is a problem (for me) that got carried over from DTPO.

[2]: OutlineView. I really like the new way in which the database’s folder structure is displayed in the sidebar qua, I assume, the NSOutlineVew Class. However, the structure does not persist and frequently collapses into a flat list. As an effect I’m constantly re-opening the active groups I’m working on until the OutlineView collapses again only to repeat the process. I’m not sure what exactly causes this behavior on my end, but I’ll let you know once I’ve caught it in flagrante delicto. (As it happens I just did: e.g. if I delete the most recent predicate(s) from a database-wide search).

[3]: Cloud View. Technically not a bug, but looking at the cloud view I’d expect a set of elements carrying semantic value sorted or emphasized by frequency. Maybe you could introduce an option to dismiss mere numeric representations of occurrences in a file. 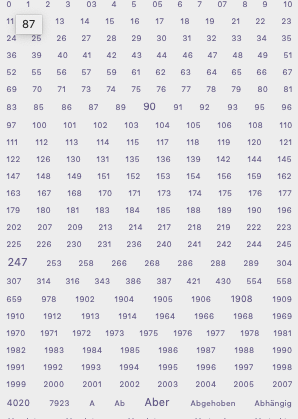 [4]: Group Icon. For some reason, one single group got the old folder-icon assigned, while the others don’t. It’s only unique characteristic I could identify is that it doesn’t contain any files directly, but more folders/ groups. However, I couldn’t reproduce the behavior. Creating a new group and nesting two groups inside yields the new icon. I’m sure I could get rid of the “problem” like this, but maybe it’s indicative of a real bug. The respective database was formerly used with DTPO.

I sent in the report. Thanks for the heads-up!

I’ll try to do that as soon as I get around to it!

Of course not; the issue I addressed was precisely that the Cloud View does not only show words, but – as in the screenshot above – most of the page numbers. Sure, these are treated like strings and hence show up. So, instead of calling it a bug per se, I’m wondering about an option to filter strings without alphabetic content, i.e. numbers from the displayed results. Really nothing but a minor inconvenience and your suggested alternative sorting method basically gave me my desired result.

(You know, something like [w for w in words if w.isalpha()] in pythonian syntax).

It’s possible to excluded selected words from the Concordance via the contextual menu.

I indeed can exclude them