IPadOS 15.6.1
I have DTTG and Obsidian open side by side. (Not Slideover). I’m working in the depths of a database. I switch away to another app.

When I return DTTG will be open to my global inbox.

FWIW In a iPadOS Beta thread @MechanicalPoet reports the same behaviour with slide over mode.

Not sure if this is a bug or a feature request.

I can confirm that behaviour on DTTG 3.5.5 on iPadOS 15.7. It does not occur when DTTG is the only app open on the screen, but does occur when DTTG is operated in a split screen. @eboehnisch Eric, is this a limitation of iPadOS, a bug in the same, or one in DTTG?

A very good question. I would say it should be a bug in DTTG. I’ll have a look but am currently on vacation for a week. I’ll check it out next week when I am officially back at my Mac.

I’m sorry; I actually knew you are on vacation but forgot when I pushed the post in your direction. Thanks for responding anyway

enjoy your holiday both of you

Eric - just circling back to see if we know: is this a DTTG bug? Or an evil feature of iPadOS?

I’ve just been distracted by some other work here in the company but will have a look shortly.

Are you seeing a crash as well?

@eboehnisch: I just filed an issue for a persistent crash related to this thread.

Hey @eboehnisch and @BLUEFROG - hope you guys are well. I have been meaning to comment on the issues I’ve been having, including this same problem, for a while. However, I’ve had Apple Senior Tech Support guys trying to resolve other seriously problematic issues first (that also impact on DTTG) with iPad OS 15.6.1. For the record, that’s running on my 12.9” iPad Pro 3rd Gen. So for me the jury’s out for now on whether it’s an iPad OS problem or DTTG (or both). I’ll try to be brief, but it’s complicated - so be warned:

After literally weeks of back and forth, the only solution they’ve come up with is (even though they’ve established it is part of a now known issue) ‘due to development priorities’ with newer iOS 16 coming out, they now want me to wait until that’s available and do a supervised iOS 16 install from recovery mode to see if this fixes it. Can’t say I’m holding my breath.

Anyways, aside from DDTG repeatedly losing it’s last document location, and defaulting back to the Inbox, when switching between apps - Note this for me is (a) when DTTG is in full screen mode, not split screen, and (b) I only have one instance/Window of DTTG open at a time - and to answer @BLUEFROG ‘s question, I’m also having issues with DTTG crashing and restarting both whilst using it, and when switching back to it from another app.

Doubt it’s significant, but for completeness, I’m using an Apple Magic keyboard and usually use Cmd+Tab to switch between apps. What’s also curious is that very often, once I’m working in DDTG and try the same shortcut to switch back to the other app, it plain refuses to work, so I have to bring up the Dock to switch out of DDTG to the other app - However, when this occurs, switching back to DTTG using Cmd+Tab always still works. So it’s a one-way problem; frequent but not every time. Go figure?

The other issues with iPad OS and DDTG are off topic, but thought I’d mention these here in case others are having them too and are somehow related. Feel free to move this part to another thread. Apple’s Files App behaves very erratically, but only with the DTTG folders:

5.Final issue (not likely connected to the above) is that the total data for “Documents and Data” in DDTG is taking up way too much of my iPad’s storage than can even be logically accounted for. See attached from Settings>General>IPad Storage>DevonThink which shows a whopping 402.33GB out of my total 512GB available.

Note I’ve got all my databases set to “On Demand” and purged them to the bare minimum, yet each database in DTTG’s Info lists them as being the same size as those on my Macs with the complete data present. However, even that doesn’t make sense as all 5 databases together account for less than 14GB of data - not >400GB!

My iPhone’s databases are configured exactly the same, yet Info shows them as all having the exact same sizes. However my iPhone Storage shows that DevonThink is using 152.68GB of storage for the same <14GB required for these 5 databases!

Whether this last point is in any way related to the frankly bizarre behaviour of Files or the sync process for DTTG I’ve got no idea, but it causing massive, unnecessary and unexplained storage shortages on both my iPhone and iPad Pro.

Sorry for the long post - though I did warn you. If Apple’s plan doesn’t fix this (and their other problems) then I’d be very grateful to hear if or how you guys can help

Are you seeing a crash as well?

Jim - How would we know if the app had crashed. I know that if I do what you described when I return to my app pair DTTG/Obsidian that DTTG is back at the Global inbox but that’s all I know.

I was able to reproduce the issue. Fixed for the next maintenance release.

How would we know if the app had crashed

I’d love an answer to that even so

Most of the time, a crashing app just terminates.
In my case runnig beta builds, I see this… 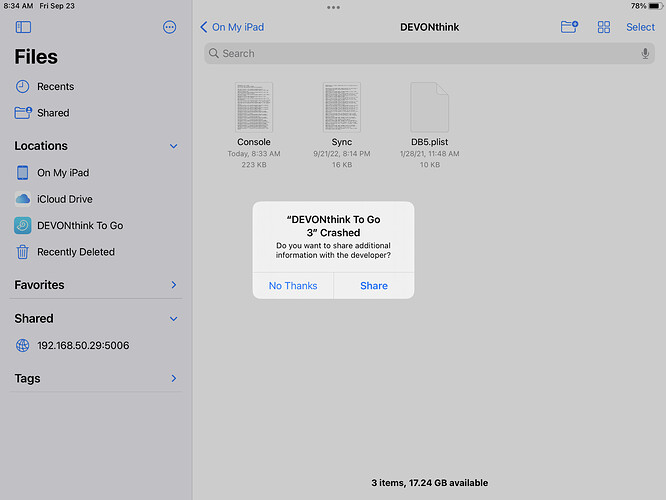 Phew. I was kinda hoping the answer wasn’t going to be something really obvious I’d missed

So unless we’re on a Beta build we don’t know that app crashed. (That sounded harsh, not my intention).

We just can’t tell that the app crashed because we don’t know.
- Mark

Unlike macOS, Apple’s mobile operating system is generally much quieter about problems. It will silently terminate processes, often leaving the user with the (incorrect) feeling all is always well.

Let me reply to your various reported issues: