I have a sparse data base in DT3, when I synch it with my DTTG (ipad + phone) the sparse db appears in my DTTG but does not ask for the code to open. So the database is open the whole time I have DTTG open. Is this normal, I would like for it to ask for the code when I want to access something from that dadabase, as 95% of the time I access my non encrypted db & don’t use the info from the sparse db.

Thanks, is encrypted support something being considered for future versions?

iOS devices already offer on-device encryption so we currently have no plans to offer an additional layer of encryption on the already existing encryption.

Per-database passwords are complicated to solve from an interface perspective on iOS where all databases are always “open” on app launch.

Interesting. So does this mean that my databases that I thought were encrypted that require password aren’t actually encrypted? I set the passwords on Devonthink for mac, but then open on DTTG. A bit confused.

The data in DEVONthink To Go is device-encrypted, not encrypted in the application*(which is what happens with other apps in iOS as well)*. Your data is encrypted at rest, so when the phone is locked the data can’t be accessed by anyone. When you unlock the iOS device, the data is decrypted for you to use.

Also, the database passwords you set in DEVONthink are not for locking a database. This is clearly noted in the File > Database Properties… 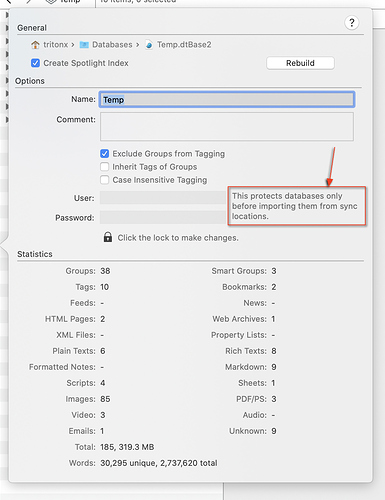 In addition, when you set a per-database password on the Mac you’ll need to enter this password in DEVONthink To Go before you can sync the database. From then on this database is protected on the device using the device-wide encryption. You can also set a passcode or use Touch ID or Face ID on the device to keep people from getting into DEVONthink To Go and view your data.

Thank you for this. I commented on another thread. Was a bit confused by this. I always assumed (incorrectly) that the database password encrypted the data in the icloud. Does this do anything for data that resides in iCloud?