A question about memory usage in iOS. I have my iPad pro set up to sync 1 database (in addition to the global inbox, which is currently empty). The database I’m syncing consumes 31.78G on my Mac. On my iPad, Devonthink To Go reports memory usage of 88.22G. Is this typical, or do I have something configured wrong? Everything looks correct from a folder structure/file perspective (no unanticipated duplicates), but it seems odd that the same data would consume 2.75 times the space on iOS (where space is very limited).

With the exception of the space requirements, syncing seems to work well with the latest versions of DT on both platforms. I installed Sierra last night, opting out of having my databases stored in iCloud, all went well (so far) with that also.

The database I’m syncing consumes 31.78G on my Mac.

According to the Finder or to the database’s properties (see File menu)?

On my iPad, Devonthink To Go reports memory usage of 88.22G

Does DEVONthink To Go or iOS report this number? Which versions do you use?

I synced using Dropbox and selected “download everything” (I can’t remember the exact text, but not download on demand). To try this, I did a “clean” install on iOS. I deleted the previous instance of DTTG, re-downloaded the app, and immediately set it up sync this one database (and the global inbox, which is empty).

OK, database size on disk and database size in Devonthink are two different things. While the size on disk (in my case) is about 30G, “database properties” in DT reports the same DB as consuming 78G. DTTG is (according to iOS) allocating 84.4G. That’s not terribly different as a percentage.

While the size on disk (in my case) is about 30G, “database properties” in DT reports the same DB as consuming 78G.

Does your database contain indexed files/folders? The database properties count them too, the Finder doesn’t.

I finally resolved this. As with many problems, it was not a single issue. And, like nearly all problems, probably my fault (just ask my wife).

Condensing lots of investigation down to a few sentences…

My database on Mac OS (used to create the original Dropbox packet sync folders) was not in the best of shape. I’m not exactly sure what I had done (I think it had to do with converting pdfs to pdf+text and re-doing files that had already been done with different settings). Anyway, rebuilding that database made the size in DTPO the same (about) as the size on disk. This however did not fix the excessive iOS memory consumption, even when the “rebuilt” database had been synced with a fresh install of DTTG on my iPad Pro. That issue was solved by deleting the packet sync folder in Dropbox and starting the process over with the rebuilt database as the source. Perhaps I used a hammer to kill a gnat, but it only cost some time and now everything is “clean.”

In retrospect, I’m kind of glad this happened because my database had problems that “verify” didn’t find, and now I have it fixed. In general, it might not be a bad thing to do a DB rebuild, and not just a verify, prior to an initial sync with the new system.

Glad you’re back up and running, Gary.

In general, it might not be a bad thing to do a DB rebuild, and not just a verify, prior to an initial sync with the new system.

I actually advocate this myself. However, most people don’t want to do it since it can take a bit of time. See: blog.devontechnologies.com/2015/ … -database/

Both DEVONthink for Mac and DEVONthink To Go not only store the files themselves but also build a full-text index which consumes additional data. In addition files on disk always take up a bit more space as they consume discrete blocks of data regardless of their content. So if you save a lot of very small files the overall used amount of disk space can be considerably larger.

In my case database is reported at 8.6GB on both the Mac and the iPad DTTG, yet in the finder on the Mac the size is 13GB whilst on the iPad under Settings memory the size is 26GB.

I understand the comment re indexing and small files (approx 10,000 files in the database) but it’s unfortunate that the memory used on the iPad is twice that of the Mac, although of course the iPad version figure for memory usage covers both the app and the data.

Apart from that comment, the new version of DTTG is great ! Sync is working well and Devonthink has been a game changer for me on the Mac , allowing an almost paperless filing system that allows documents to be found easily and links to related documents, the iPad version is very encouraging.

I actually advocate this myself. However, most people don’t want to do it since it can take a bit of time. See: blog.devontechnologies.com/2015/ … -database/

please give a hint how to find this blog post
thanks, Martin 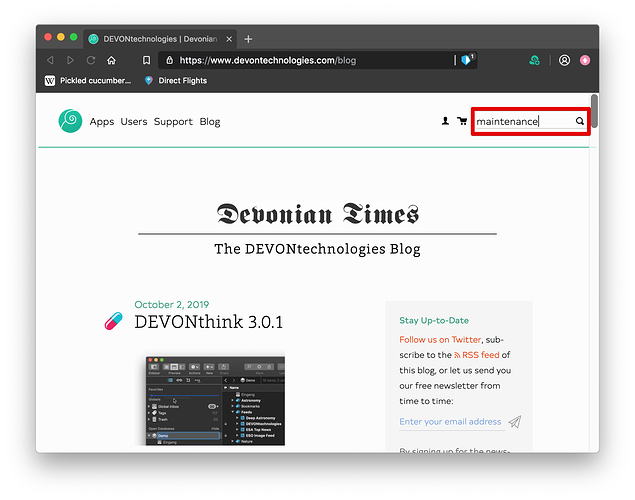