This is planned for future releases.

Oops. I was daydreaming

This is the one thing I was really hoping for in DDTG 3 as it’s been discussed and wished for in these forums since at least 2010 (and every year since). I’m not a complainer, I’ve written nice things in these forums about DT and DDTG but can you guys elaborate why this is so difficult so it is always ‘planned for future releases’? It’s not like I’m the only one asking about it, take a search on the issue and you’ll find lots of other forum members who have been wishing for this too. I understand the thought that the smart group could change on the Mac and not be reflected on the IOS database but isn’t this the same as for anything in the database? I mean, after I synch with the Mac my IOS device has only that data until the next time I sync (I only synch locally, not through iCloud). It’s a big hole in an otherwise really nice relase (DDTG 3). INquring minds would like to understand this issue better. Thanks!

I am really looking forward to this; smart groups are so powerful - one of my databases is basically made up of one group and a load of smart groups. In fact, to be quite honest, I bought DTTG3 untested just to support DT in their quest to bring us smart groups (and an upgrade to Eric’s Fiat :D)

Not sure to what purpose and extend you use them, but shouldn’t it be possible to create ‘pseudo’ smart group as a work around?

Smart action (replicate upon some trigger):
From group S to group Z

Not usuable of course if you’ve got tons of smart groups or require very actual groups. And it requires testing of course should you want to bring this into action. And an always on macOS device.

I think in theory that would work; in my case, at least, the number of smart groups in the database (> 120) would be prohibitively large and not worth the effort. I’ll hang on in there a little longer, it looks to me like the groundwork has already been laid in DTTG3

Didn’t notice that, but sounds logical. What groundwork are you implying?

What groundwork are you implying?

The number/type of smart groups already available in DTTG3 and the ease/speed at which DT added the “Ghosts” smart group with the update to 3.0.2; that to me suggests that DTTG can handle diverse conditions for smart groups, meaning that all that is missing is sync. Obviously that is only my interpretation, and seeing as I’m not a programmer, have no idea of the inner workings of DT/DTTG, and am basically just producing reasonably educated hot air, things could in reality be quite different

Didn’t see that yet. I’ll edit my post regarding pseudo smart groups in the ‘zero-byte’ thread.

Didn’t see that yet.

It will appear automatically in DTTG3 if you have DTTG 3.0.2 and there are 0-size files. If there are no such files, the smart group seems to automatically hide itself, even if you previously opted to have it display.

all that is missing is sync

Addition to your previous remark regarding future smart groups in DTTG.

I’ve been busy analyzing an issue with item counts in DTTG and happened to notice that smart groups that are created in DT increases the item count on both DT and iOS devices.

happened to notice that smart groups that are created in DT increases the item count on both DT and iOS devices.

Smart groups are actually present in DEVONthink To Go but hidden since they’re non-functional at this time. You can view them by enabling Show hidden items in the View popup. 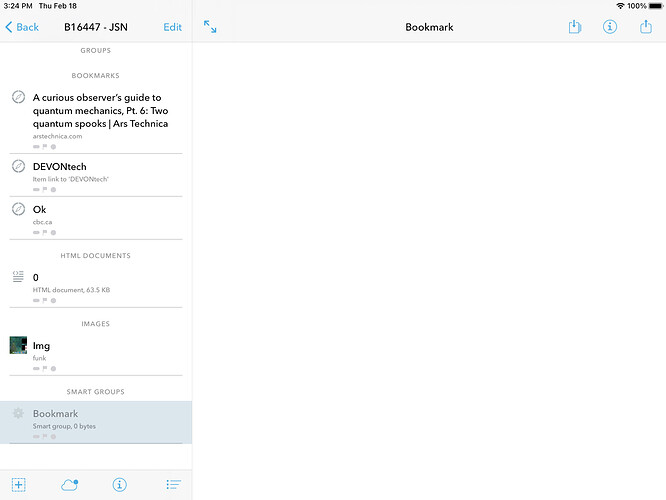 I can seeeeeeeee them! So close, but no cigar!

Part of the issue in implementation is the underlying technology is very different between DEVONthink and DEVONthink To Go.

I guessed as much. I’d be happy just being able to sync them, but I understand that for others that will not be enough. I do wonder whether it might be a helpful intermediate step though - but I’m biased in my opinion, of course

(along the lines of “if you can’t help them all it’s better to help some, than to help none.”)

And then there will be people thinking about smart rules with external scripts… one can dream.

Also, while creating smart groups is fairly simple in DEVONthink, merely syncing them to be used in DEVONthink To Go will not be enough for many.

I suspect creating them in DT3 only but syncing to iOS will provide 90% of the function for 10% of the coding effort by DevonTech - that is a good tradeoff.

I am skeptical whether creating smartgroups would actually be practical due to the small size of the interface.

But syncing smart groups from the desktop would be terrific

… doesn’t that mean that merely syncing them to be used in DEVONthink To Go will be enough for the rest?