I have a large PDF that I’d like to highlight and add bookmarked pages as I go along. I get that, in DTTG, I can’t add bookmarks - I can only see bookmarks that have been added through another means.

Suggestions as to what app to use to mark up a PDF that resides inside of a DT database while on an iPad? I tried using PDF Expert, and it was a mess - the bookmarks didn’t get synced, and then the whole file was corrupted and I had to bring it back from the dead.

it was a mess

My experience has been the same - the lack of a proper file system on iOS makes it pretty hopeless once you leave DTTG, frankly.

I’ve tried PDF Expert, LiquidText, GoodReader, Acrobat, PDFReader Pro, PDF Viewer and have resigned myself to doing all my bookmarking (and often highlighting) on the Mac, and using DTTG on the iPad for additional highlighting/ handwritten markups.

If it helps (not the answer you are looking for, I know), a KeyboardMaestro shortcut for highlighting on the Mac takes some of the pain out of highlighting with a keyboard, eg: 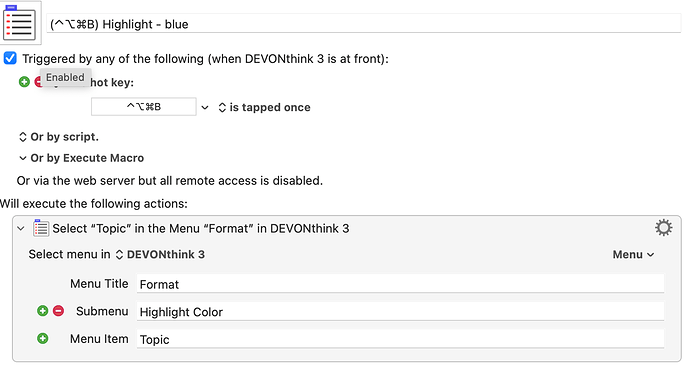 I’m curious why you’d use KM for this instead of just a custom shortcut?

Erm - habit and familiarity, I guess. KM has become a bit of a one-stop keyboard shortcut repository.

TBH I hadn’t thought about it.

Well, thanks. Not the answer I was hoping for but at least I’m not alone.

When you bookmark on the Mac, are you doing this in DT? Or something else? I know that might out of scope for this forum, but thought I’d ask…

I know that might out of scope for this forum, but thought I’d ask…

Is there such a thing?

at least I’m not alone.

You’re not - others have posted about workarounds they use, eg mhucka.

When you bookmark on the Mac, are you doing this in DT? Or something else?

I usually use Acrobat DC - it’s reasonably efficient with the keyboard (Cmd+B) and it will “name” the bookmark with selected text, which can be useful. PDF Expert for Mac is also quite good but as best I recall it doesn’t name the bookmarks by text selection.

That’s correct. There is no standard “bookmark” in a PDF, just a bunch of individual implementations.

I have been getting annoyed long by the weakness of pdf function in DTTG. The fundamental Problem is that on Account of the catastrophic filesystem of iOS DTTG must funktions not only as a fileapp in sense of computer but also as a PDF App, while in mac I can use the other app as a supplement. I think that the Team of DTTG should pay attention to the essential difference between ios app and macos app

I have a strong hunch that the Team knows massively more than mere mortals of the difference between IOS and MacOS systems and their apps.

Given, as you said, the catastrophic (lack of) iOS filesystem, what would you suggest? It seems like the issue you’re complaining about would be something for Apple to fix.