I’ve got a group “00 processed” where all my processed imports end up before classification. I don’t want that group itself to show up in Classification suggestions so I’ve selected “Exclude from classification” for the group.

I was surprised to find out that I can now also not use that group anymore if I use it as the “Search in” group for a smart rule that triggers “On Classifying”. If I select a higher-hierarchy group (e.g. Databases) the trigger does run which seems inconsistent. I would expect the behavior to be that “Exclude from classification” would only exclude the group from showing up in Classification suggestions, not prevent running smart rules with “On Classifying” triggers. 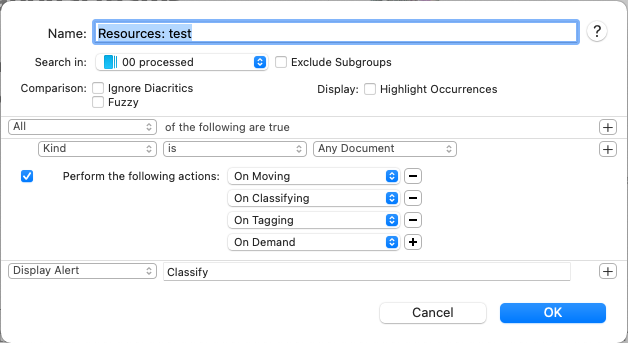 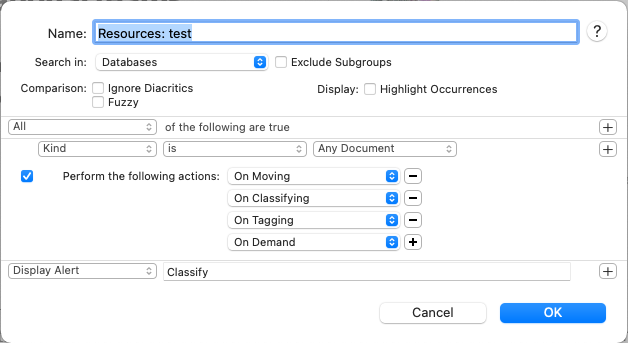 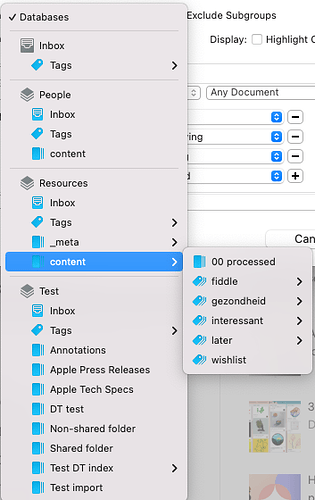 Stupid question but how do you classify an item to this group if it’s excluded from classification?

Stupid question but how do you classify an item to this group if it’s excluded from classification?

Scripts don’t trigger smart rules by default. In addition, the triggers On Moving and On Tagging are sufficient as On Classifying is a subclass of On Moving and using smart rules on demand is always possible (and therefore the On Demand trigger is only useful if it’s the only trigger to ensure that a smart rule isn’t automatically performed).

I understand, but I’m not using scripts for testing now. When testing it’s simply not functioning as expected. All the classification is done manually and so it should always trigger an “On classifying” event in a smart rule. It works fine like I mentioned when selecting a higher hierarchy folder - which is inconsistent.

I’ve tried many different ‘forms’ and it never works when trying to manually classify a document and trigger a Smart Rule with “On Classifying” on a group that is Excluded from Classification.

When testing it’s simply not functioning as expected. All the classification is done manually and so it should always trigger an “On classifying” event in a smart rule. It works fine like I mentioned when selecting a higher hierarchy folder - which is inconsistent.

How exactly did you move the item? So far I couldn’t reproduce the issue, a new group and new smart rule searching only in this group work as expected.

Meaning that this group is not excluded from classification anymore?

What I’m doing is this:

With the above steps the “On Classifying” trigger does not work in a smart rul for the group “00 Processed” - it works for “00 Processed” if I select a higher hierarchy group.

And the destination group is a subgroup of 00 Processed? Otherwise the smart rule should indeed not be triggered if it’s only searching in 00 Processed.

No - the destination group is not a subgroup of 00 Procesed - it’s actually a sibling (see the group hierarchy in the screenshot earlier). The sibling (e.g. the group ‘fiddle’ is NOT excluded from classification).

It is not where the item is that triggers the On Classify trigger.

That’s right, all triggers which do not offer before/after variants are triggered afterwards.

the “search in” should specify the target for the On Classify item.

That is correct.
The Search in dropdown specifies the location to watch for activity, in this case the group receiving the classified file. The smart rule is unaware of the activity of other locations.