(NOTE: DTPO 2.x question) I suspect that I’m missing something that I simply haven’t found in the documentation or here on this list, so I’ll attempt to state this as briefly as possible:

How do I determine the “location” within DTPO of duplicates of files? (also replicants?)

So far, my technique has been the following:

I wish there was a faster way to go from Step 2 to Step 4 to Step 6 without leaving Show Info (especially if I still get Step 5-- a chance to confirm that the duplicates are in fact precisely the same, unless this is an unnecessary test). Have any of you found a better method? I’m not as confident with my scripting abilities to date compared to some of the impressive work I’ve been noticing on here.

I’m afraid this is one area where the database and filefolder metaphors for DTPO are slightly confusing for me: Replicants are wildly useful to me so that I can place notes/files in groups etc that logically occur to me, without having duplicates of the same file sitting there in the database ingest folders taking up space. Particularly for large PDF, image and video files!

Thanks for any advice possible!
Matt

NOTE: helpfully, the files moved into the DTPO 2.x trash are not listed in the Show Info duplicate/replicant list, so I can hold off emptying the trash until later in the session when I feel really confident about my reoganizing work.

One way you could use to quickly gather the duplicates is opt-cmd-delete, which would send that file and all its duplicates to the trash. Then you could move the new one back out of the trash to new place where you want it to reside.

Alternatively you could use “See also” because the duplicates should show up at the top as the best matches for your newly imported file.

I would also like to know the criteria for determining a duplicate. I can tell you want it isn’t: file name, URL, date modified, date created. I think it uses the word count index, but I’m not sure. So in that way it’s probably more accurate than doing it by hand in some ways, since it will catch files with different names but the same content.

However, one thing I did notice is that if I have a plain pdf and a copy that has been marked up with Skim, they show up as duplicates, even though one clearly shows the added notes, etc inside DT. NOTE to DEVON guys: maybe compare the xattrs of the files before determining duplicate status.

How do I determine the “location” within DTPO of duplicates of files? (also replicants?)

At least for replicants, the fastest way is via the Context Menu (Control-Mouseclick). If you control-click on a replicant and then go to “replicate”, the locations of all the replicants show up at top of the Context menu.

The file duplicates that worry me the most (ie I am most nervous about deleting the wrong one and the file sizes are the largest) are the image-only pdf (bad handwriting!) and large images. I didn’t think about either of these tricks – the contextual menu replicant element is really nice, don’t know why I didn’t notice how that worked before. (a “solve” as far as I’m concerned). Also, I had been nervous about the “see also” on the docs without text to match because there was such a long list of possible matches – somehow I didn’t notice how consistently the top ones are the duplicates!

Thanks so much!
Matt

If you control-click on a replicant and then go to “replicate”, the locations of all the replicants show up at top of the Context menu.

Interesting. Location paths show up under all the “Move/Replicate/Duplicate To” CM and action menus. But it’s confusing because you’ll also see multiple location paths when a non-replicant item is selected within a replicated group. 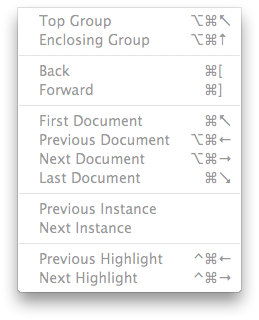 The ability to easily list and find locations of all instances of replicants has been suggested several times, e.g. displayed in the Information panel. Using Go > Next/Previous Instance is clumsy; I’ve never liked navigation between different groups being the method of revealing hierarchical locations of replicants within a database.