I’m seeing nothing happening this side. The focus does indeed jump from MindNode to DT3, but no ‘new’ file/window associated with the x-devonthink-item// back in MindNode is opened… Any suggestions?

Reboot? Update DEVONthink 3 to latest beta release? The behavior when clicking the link in MindNode to cause DEVONthink to open the linked-to document in a new window works well as far as I can tell. Perhaps the windows are falling behind other windows or on other spaces?

Mindmaps can be shared or publishes as images for sure but as ‘live’ documents you explore on the web, I would imagine that would take some additional work. There’s probably plugins for Wordpress et al that can take exported OPML from a mind map application (most export in OPML) and represent it in a form that echoes a mind map.

I watched the set of videos on Zettelkasten. Very nice indeed, and … very complex. It’s a truism to remind everybody that the more complicated the system, the easier it is to suffer and be disabled by a disruption. I would like to suggest radical simplicity. If the goal is to create a trace marking your readings, record some ideas, synthesis that cuts through several areas of science, incubate some ideas and develop them, accumulate material for a publication, then Devonthink combined with bibliographic software should be sufficient. One can create a database of notes and use the tools available in Devonthink to get a full functionality for most projects. Suppose I want to tackle a problem of causality. I have my bibliography, I have my notes, I have tags, smart groups, hyperlinks, metadata, the database of my notes has a certain hierarchy, which in itself reveals some relations. I can slice and dice the “knowledge” residing on my disk searching for best angles and arguments. At the same time the tools contained in Devonthink will minimize a chance that I’ll miss something as long as it is in my databases. Why exactly do I need some visual graph of possible hierarchy of terms contained in my databases ? I think I should have it in my head while writing something. Then again, maybe i’m missing something. If so, feel free to criticize me.

I agree with you in that simplicity is usually the way to go, at least that is what I try to accomplish: a truly intuitive and simple solution to organize my scientific literature. And for years now I have been doing research in a way similar to what you just described, having a collection of literature in devonthink, together with my own ideas in the form of notes and having the relations between all the literature in my mind when writing a paper. However, more recently, the amount of relevant literature I need to organize, understand their relations and keep everything in mind becomes too much to remember, since I am usually working on several projects at once. Additionally, I want something that I can go back to after a longer period of time and easily understand the relations between the papers without spending too much time. That is exactly why I want/need a visual way to organize the items in my database. I will do it for now with iThoughtsX but I am still hoping for a smoother way in the future.

I guess the state of play with the tools for this kind of work do map most readily to what you specify, a database, organised research, and a referencing tool.

What I found interesting about Tench’s approach in the video was her going beyond gathering and organising to actually making her thoughts concrete, using a mind map tool almost like a word processor, where a certain precision enters. So often I use DT to organise and gather, a database per project, groups and subgroups to structure it meaningfully and usefully, with data and notes as elements I value. Mind maps have been pretty loose, ‘this connects to this and is a sub-cluster of that’ sort of thing.

She locks it down, establishes her thinking, does the work I normally associate with writing or producing final work. She impressed me but I do take your point, it is a delicate complex set of tools holding all of this work up. Perhaps it is more a measure of the work ahead for developers, to author research tools which are more apparently effortless in helping us as we articulate our thinking.

Yeah, I liked her degree of precision as well. I especially agree with her in that the connections between literature are timeless and we should make those relations clear to help our future selfs for when we need to go back to that particular bucket of literature. I would like the process of making this knowledge visible to be as simple, fast and straightforward as possible, so that I do it naturally while reading.

I especially agree with her in that the connections between literature are timeless and we should make those relations clear to help our future selfs for when we need to go back to that particular bucket of literature.

It seems to me the work required to document such collections would be so much more worth it if there were a way to share and collaborate with peers/colleagues rather than just “our future selves” - some way to easily share such maps/connections so that other academic/professionals can not only read them but also expand upon them similar to how a Wiki works.

It would be an interesting way to share knowledge, but here I am talking about something different, something that helps one personally to (i) keep the general picture while going through literature and more importantly (ii) later reactivate the knowledge we had when we were making those connections. Of course, having a collaborative platform would help to discover new literature and maybe assist with (i), but (ii) is really why I am doing the mindmaps now.

I have a stupid question. A mind map is just a Tautology of folders’ hierarchy. (that’s why I don’t use mind map - just a very personal judgement)

The following example shows that mindmap can be produced in DT by three steps:
(1) Create an empty groups hierarchy to layout the connected nodes of concepts.
(2) Replicate relevant documents/groups into the map’s groups.
(3) For connection among nodes, replicate items or groups into the related group depending on the direction of the link.
(4) In addition, there is a std script allowing user to copy the emptied group structure as a template for other maps.
So, it’s the bird’s eye view that matters? (given the fact that we can even change the icons of DT’s groups and documents). If that is the case, DT should have the technology to “show” a graphical representation of the group structure dynamically (like the way DEVONagent or words-cloud does BUT not creating groups in dynamic manner). Personally, I doubt that will add any additional value to current DT users. BUT, it could be an eye catcher to persuade mind map users switching to DT!

The following map and the DT’s group structure are equivalent: 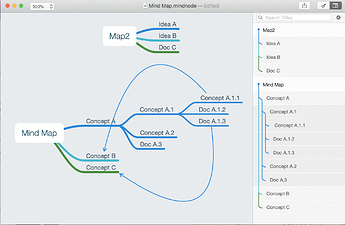 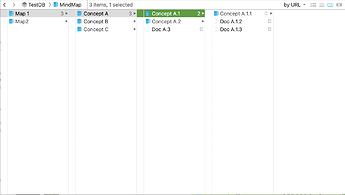 I am talking about “mindmap-like” visual organization, which doesn’t have to be strictly hierarchical. It might not be for everyone, but for me a visual representation of my current knowledge about a certain bucket of literature goes far beyond what a folder/group structure can achieve. It is probably a combination of the bird-eyes view and the ability to use spacial distance to create implicit connections additionaly to the hierarchical structure.

This is not the prettiest example, but it worked for me when writing my last paper: 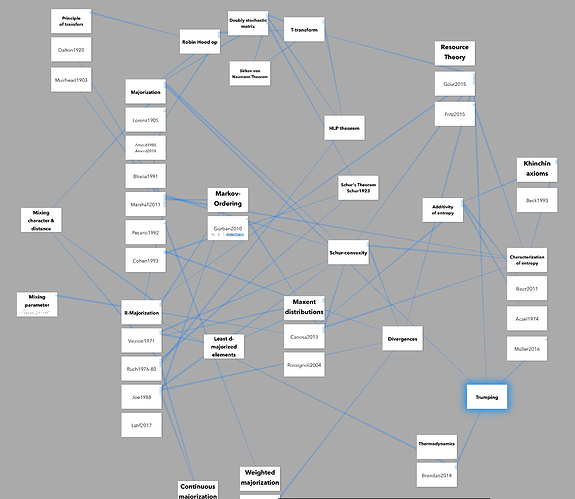 Yeah. That’s a very different usage scenario. To me, it’s more like concept/cognitive mapping where there are multiple links and if I push it further the link itself can carry info, by arrows and by link’s description (such as the app cmap). For example, A - link( with a description of what it is such as “leading to”, “depending on”, etc) - B.you may want to take a look at an app “thebrain”. But u are right that tinderbox is more likely the right cup of tea.

Technically, both are often seen as mind maps, just different in presentation. However, their uses are generally different in practice, allowing for the perception of the user.

When selecting the URL-links from inside the RTF Contents file in DT3b6, and dragging them into MindNode, clicking on the links inside MindNode, opens the associated file as expected, in a new window over in DT3.

However, when dragging the actual/entire RTF Contents file from DT3b6 over into MindNode, which – for all the world looks exactly the same over in MindNode as the approach taken above – then clicking on those links doesn’t appear to do anything. All that happens is DT3 gets the focus, but none of the association files are opened in DT3.

Have restarted etc., but no joy. Which is odd. Will play around a bit more – but at least some of the expected functionality is there!

Sorry, cannot reproduce. Fat fingers on my part, no doubt. So, dragging a document out of DEVONthink places a copy of that document into the destination – Finder, an email message, etc. Maybe something is wrong with MindNode’s “received file” logic?

When selecting the URL-links from inside the RTF Contents file in DT3b6, and dragging them into MindNode, clicking on the links inside MindNode, opens the associated file as expected, in a new window over in DT3.

However, when dragging the actual/entire RTF Contents file from DT3b6 over into MindNode, which – for all the world looks exactly the same over in MindNode as the approach taken above – then clicking on those links doesn’t appear to do anything. All that happens is DT3 gets the focus, but none of the association files are opened in DT3.

That would make logical sense. An RTF file - or any file for that matter - is not its contents. If you’re dragging selected URLs from the RTF file, that is definitely not the same things as dragging the RTF file itself.

If it actually worked to drag the RTF file and MindNode magically split it into a graph, I’d have been impressed (especially as it would definitely be edge-case behavior coded for).