When reading on paper-books I usually use a ruler to keep reading focused on the right line.
On computer screens this is a bit harder to do: normally I have to use the upper edge of the screen for the same effect.

Recently I came across a nice little feature on Skim and thought this would look very good on DT3:
it is called a reading-bar. 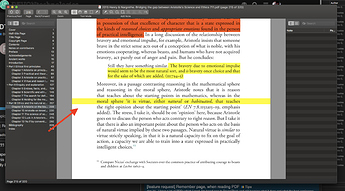 On Skim you have to drag it up and down with the mouse, but IMO it would be more comfortable if it just moved along with the mouse after you activate it.

So, just another suggestion for you guys.

Good idea, I tried it in Skim but could not get the line to move. Anyway, it should be dynamic in the sense of moving to an Nth line as some like it in the middle, some one third and so on. And should be sticky between sessions. Also the hilight color and alpha levels should be set by the user. It’s not a must-have feature but a fun extra feature.

I have often wished for a reading bar in DTTG, where I usually do my pdf reading and highlighting.

The request is noted, though it’s definitely the first one of its kind.