When dragging an email from macMail to Devonthink, it takes a few minutes for Devonthink to import it into its database.

The wheel spins as if the machine is stalling but after a few minutes, Devonthink finally accepts it.

This occures when I drag the emails to the sorter or directly to the folder.

It has taken over an hour to move emails to DevonThink which should have taken 5 minutes or less.

I did a verify and rebuild, turned off the computer.

Devonthink does take certain emails but not others.

I just noticed the error "
Couldn’t get dropped items from Mail
Try to save the selected items to disk before importing them into DEVONthink. Note that Mailboxes and RSS articles cannot be dropped successfully due to limitations in Mail’s clipboard support!"

These emails are small with a few links.

I guess certain emails cannot be imported into DevonThink.

Devonthink is looking less attractive as an organizing database.

The mailbox rebuild seems to work!

How often should a rebuild be done?

How often should a rebuild be done?

It usually shouldn’t be often, but if you’re running into strange issues like this or in Mail.app, it’s a good idea.

Similar issue. I’m running a new 2017 MBP, 16G, i7. Trying to import large email (16,000+ emails), has imported 9,110 over several hours. I did change the Energy Saver from “put hard disks to sleep when possible” to “prevent computer from sleeping automatically”.

I have more large emails to import and would appreciate thoughts on how to accomplish this task faster and presumably using more CPU power.

Also at times, but not often, the Activity Monitor shows DTPO “not responding”. See attachments. 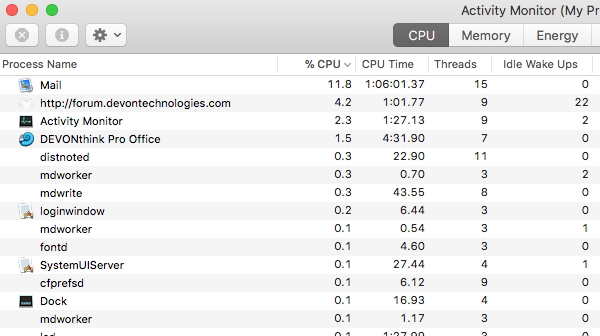 Many apps sporadically show “Not Responding” in Activity Monitor.

Generally, you should not attempt to archive large mailboxes all at once. For example, if you have a GMail mailbox with submailboxes, it would be better to archive the smaller mailboxes, one by one, instead of the top level mailbox.

If this is a large mailbox, you could get a timeout on import. Please enter this in /Applications/Utilities/Terminal.app (each as a separate command)…

…while DEVONthink Pro Office isn’t running to increase the timeout to 5 minutes.