"File not yet available"

Hi, new user here. I managed to get all my devices synced with my databases yesterday via iCloud sync. That’s Mac, MacBook, iPad & iPhone. Latest versions of all software installed.

Yesterday everything seemed to be working fine. I had all files on all devices.

I then decided to add an encryption key. After fiddling around, cleaning locations, removing software and reinstalling I thought I had everything working again. All my databases took a while to synchronise across the devices. However, on all but the MacBook, whilst the databases look correct, none of the files are actually downloaded, and I get the message ‘file not yet available’ and a ‘Download’ button.
Both iOS devices appear to be in a constant synchronising cycle, but no files actually get downloaded.

Where do I start?

Are you indexing files on the Mac?
If so, are you synchronizing the contents of indexed items?

No, I am importing. The 7 database files on MacBook Pro are in total c. 2.5GB in size and all the files are accessible.

On Mac 2, when I import the Databases they are much smaller (very small!). How do I make the second Mac download the full database rather than just links to the files?

After importing a database in the sync options I synchronise and whilst I get a message saying download 100’s of files, I end up with a database 3kb in size.

On Mac 2, in DEVONthink, hold the Option key and select Help > Report Bug to start a support ticket.

Hi, managed to get sorted.

This ultimately worked with all the devices synchronising properly and having the databases imported fully.

The only strange thing I have noticed is that on Mac 1 under Sync locations, I now have two iClouds listed and ticked. I did only create one, but two have appeared.

I think this was the issue previously as this happened and I deleted/removed one but then ended up with the problems described earlier. I daren’t remove one as everything seems to be working OK! 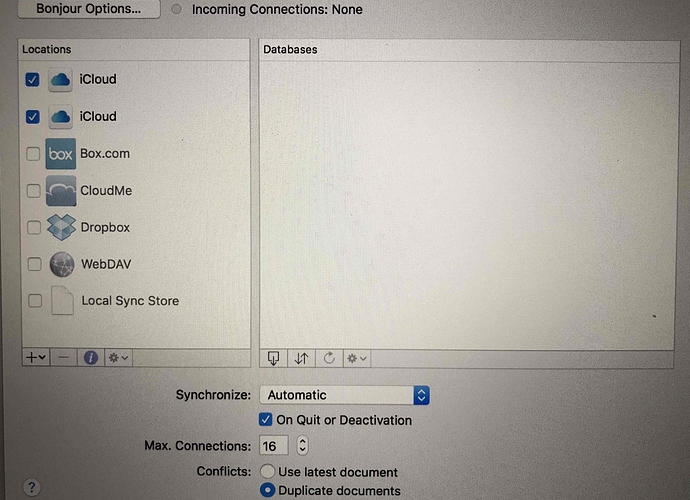 You can delete the one that’s not active.